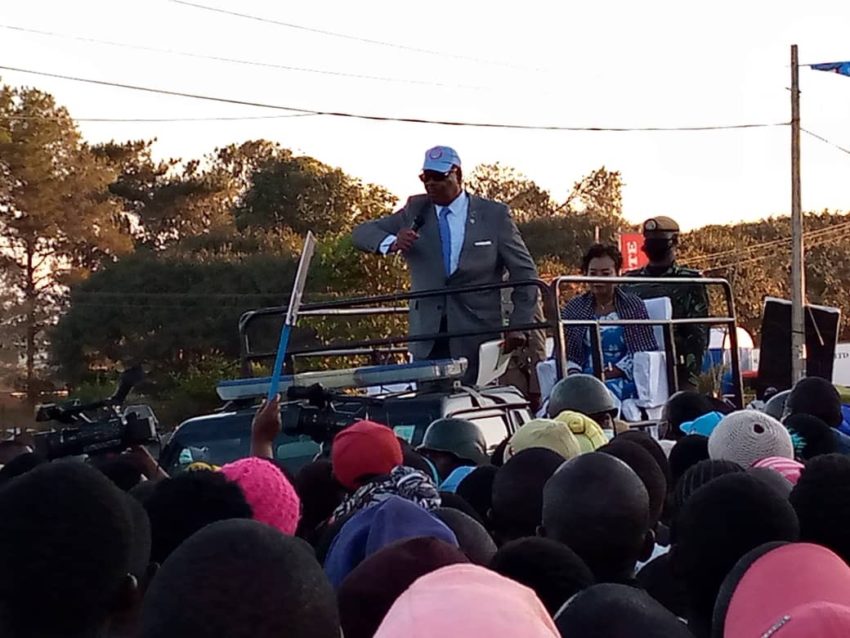 Am very sorry people of the northern region – Mutharika

President Peter Mutharika has apologized to people of the northern region for taking a long time before he paid them a visit since the court nullified the 19th May 2019 presidential election results.

Speaking to a crowd that welcomed him at the Mzuzu Shoprite roundabout, the president said he was told that the DPP party died a natural death in the northern region.

“I was told that the DPP is no longer existing in the region so i was afraid, only two people could come to see me if I happened to come but that is not the case with what I have seen today,” Mutharika said.
Mutharika further told the crowd that chiefs will be provided with diplomatic passports so that they should be respected whenever they travel going abroad apart from importing motor vehicles duty free.
The president then further conceded that several development projects such as Mombera University and Livingsyonia-Njakwa road construction project have taken long but his government will soon embark on the completion of the development projects.
He then called on people to vote for the DPP-UDF during the Tuesday’s fresh Presidential Election if the country is to stop experiencing unnecessary demonstrations which can easily generate into civil strife.
Mutharika also condemned the quarter system which is a way of selecting students to institutions of higher learning and emphasized on its immediate abolition.

Speaking earlier on, minister of health, Jappie Mhango said it is on Tuesday when those doubting the DPP’s chances of winning this presidential election will be surprised.

Malawians will on Tuesday vote in the fresh Presidential Election which is having three contesting candidates namely; Peter Kuwani, Lazarus Chakwera and Peter Mutharika who is the sitting president.

“Those who have been doubting the DPP-UDF chances of winning this election will be in for a shock, we can’t afford to have this country degenerating into anarchy, let us see what will happen on Tuesday,” Mhango said.