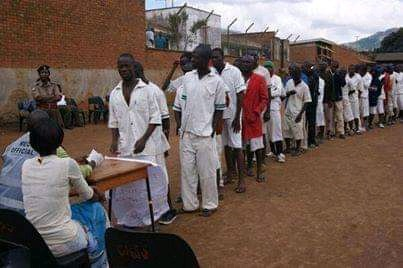 Three female prisoners at Mzuzu prison have been severely assaulted by both male and female junior prison officers because they were demanding to get Anti-Retrol Vial drugs (ARVs).

A relative who went to visit a sister in law at the prison facility disclosed to Vomi News 247 that one of the convicts was beaten to a point of sustaining a fracture on her left arm while others have several visible wounds.

Since the assault prison officials have also denied them access to medical care for the wounds they inflicted on them.
The complainant, Collins Mtika expressed sadness with the development considering that a few weeks ago he joined the junior prison officers in solidarity, when they were protesting to government demanding better conditions of service

“Of the three women one is my sister my in law Daisy Zimba, while the other women are Thokozani Msika and Wezie Nyirenda,
I am very disappointed considering that it is just a few weeks ago when I joined those junior prison officers when they were demanding for an improvement in their remuneration packages, I never knew they will turn into such bad people,” Mtika said.

Efforts to seek views of the Malawi Prison Service (MPS) spokespersons at the headquarters offices proved futile, but the regional publicist, Austin Mwasangwale expressed ignorance with development and pleaded for more time to get the truth on the matter.

“We have a lot of convicts who are on ARV therapy and they usually get the medication accordingly, but saying some were severely beaten then honestly am very ignorant about that, give a little more time to get the truth on the matter,” Mwasangwale said.

Late last week, two human rights Organizations , Youth and Society (YAS) and Centre for Human Rights Rehabilitation (CHRR) expressed disappointment with continued human rights violations in the country.
Leaders of the two rights bodies, Charles Kajoloweka and Michael Kayiyatsa said it is so heartening for the country to continue recording deaths of people in lawful custody citing among others, the brutal killing of Blair Lule whose death until now was not properly investigated.
Malawi Prison Service was party to the country signing of the Geneva, universal declaration on human rights.