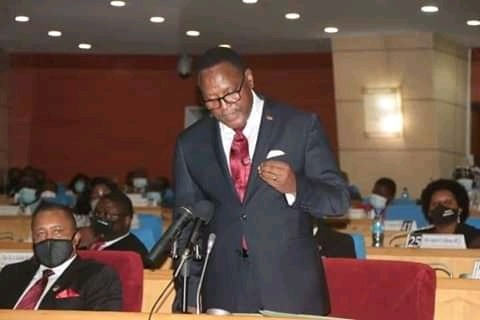 Today Malawi witnessed the fullfillment of Electoral Promise made by President Chakwera of appearing before Parliament to answer questions.

His Excellency the State President of the Republic of Malawi Dr Lazarus McCarthy Chakwera today break record in the Political History of this country as he has become the first Malawi Seating Head of State since the dawn of the New Millennium ( year 2000) to go to the National Assembly and answer questions from members of Parliament. Also present in Parliament was State Vice President Dr Saulos Klaus Chilima.

It was a historical moment as a seating Head of State was in Parliament responding to questions from members of the House. What a Milestone in Malawi Democracy.

Analysts have described the President as a man of his words . By appearing in National Assembly to respond to questions from members of Parliament , Chakwera has walk talk. Millions across the nation and some from neighbouring countries even Malawians living in diaspora followed the parliamentary proceedings on Radio , Televisions as well as Online . The country’s three main Media Houses namely ; Times , Zodiak and State Controlled MBC covered the event Live.

Malawi is surely moving forward with the right leadership steering the country towards a direction where Malawians will prosper together.