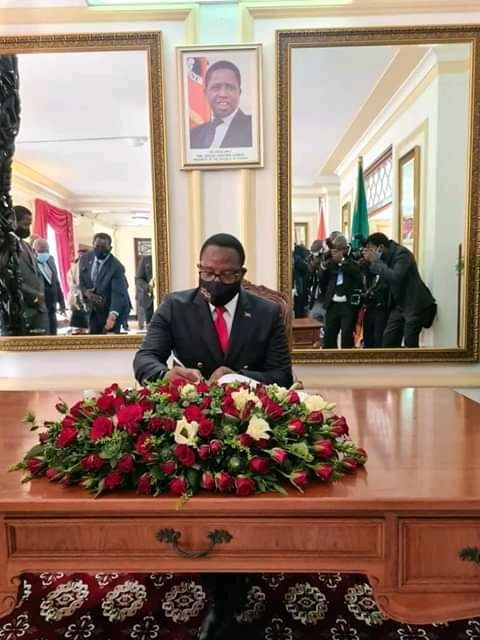 President Lazarus Chakwera says Malawians should start thinking of how to create more jobs rather than just thinking of getting employed in the civil service.

In his state of nation address on Monday the Malawi leader says the whole civil service can only absorb about 200,000 people.

He further described the first 100 days as a learning curve saying he has learnt a lot stressing that when one is on the other side, thinks that the problems can be solved overnight but when you get inside it is now when you see the magnitude of the government system

The Malawi leader then defended the recall of retired civil servants back to work saying that is aimed at bringing back efficiency in the public service which he said was heavily polluted with political stooges.

Commenting about the move on his Facebook page an economist Franklin Kazonde said Chakwera did well to recall experienced technocrats who were sent to Guantanamo bay by the DPP.

“Those guys were tortured for no reason, let them work, use their expertise than being given compensation,

“Chakwera statement does not mean that his Administration had dumped campaign promise to create jobs. He is on the right track to change Malawi’s fortunes, strengthening bilateral friendship with neighbouring countries is one key factor then stabilizing power problems, Zero tolerance on corruption. The list is endless than can boost investment and the economy,” he said

And writing on his facebook page the United Democratic Front president, Atupele Muluzi says Chakwera’s 100th day speech outlines the “levers for change” that have in his view been implemented within his 100 days in office.

“I hope that this lays the basis for delivering on the many promises for change to Malawians. It also serves as a litmus test for the Administration and it’s credibility will ALL Malawians, including partners and I have noted that the new administration had raised expectations VERY high and yet there is still no clear prioritized, sequenced plan on how it intends to deliver on its promises.

“We are in this boat together, sink or swim! With all the goodwill – this was a fantastic opportunity to demonstrate strong and successful governance which would make Malawi change its destiny,” Muluzi said.

Some of chakwera’s achievement according to what he himself presented in his state of nation address include;

1 thought on “Chakwera’s 100 Days Under Microscope”