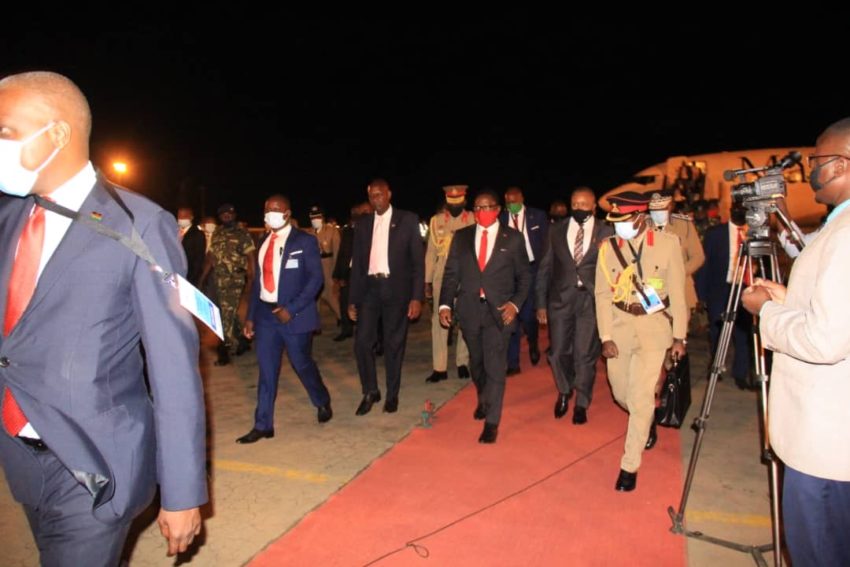 Malawi Airlines employees on a flight that flew President Lazarus Chakwera to Botswana got stranded at the airport in Gaberone as they had been denied to disembark from the plane due to their failure to produce Covid-19 certificates as required in that country.

A source from Gaborone alerted Vomi News 247 that the stranded seven employees include 4 Cabin Crew,an engineer and 2 pilots.

The source further said “They couldn’t even go to the airport terminal and they can’t refresh. All this is due to their company’s (Malawian Airlines) negligence as they took it for granted since its a return trip within a day.

“It is embarrassing as it means that they have to wait right there in the plane up until the President finishes all his meetings and that will be obviously too late.”

He further said: “It is more worrying that when you switch off all the systems of a plane after landing, there is always humid inside the plane as all the cooling system is also switched off. They are being baked.”

Chakwera was in Gaberone attending the Southern Africa Development Community (SADC) Extraordinary Troika Summit of the Organ, on Politics, Defence and Security Cooperation, in Gaborone Botswana.

The meeting was chaired by the Chairperson of the SADC Organ Dr Mokgweetsi Eric Keabetswe Masisi, President of the Republic of Botswana.

Malawi Airlines Spokesperson Joseph Josiah could not immediately be drawn into commenting on the development, saying he needed to gather information on the ground first.

Just a week ago the Malawi leader, Lazarus Chakwera was embarrassed in South Africa when he and his entire entourage were searched like suspected thugs by the South African authorities.

3 thoughts on “Chakwera’s Cabin Crew Got Stranded in Gaberone”