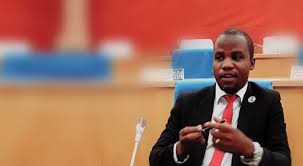 In a bid to raise funds meant for the sustainability of the club, self sponsored Chitipa based, TNM Super League outfit, Chitipa United has managed to sale its replica jerseys across the country with demand still growing by the day.

Several influential figures including the Sports minister, Ulemu Msingama and some football Assiciation of Malawi (FAM) officials including the president, Walter Nyamilandu have supported the initiative by among others buying the replicas at competitive prices.

Commenting on the development on Monday, FAM president, Walter Nyamilandu who is championing ‘Raising the Bar’ said Chitipa United has demonstrated one of the best ways to sustain a club regardless of sponsors.
“Let us all continue supporting Chitipa Utd, you can continue placing your orders now and you will be highly appreciated.

There is always a need for us to continue supporting our very own local clubs for continued participation of such rural based teams in Super League, this is a catalyst for growth and development of our beautiful game. Their performance last season were also mind blowing, Bravo,” Nyamilandu said. In it’s quest to raise K15 million the club has so far managed to sale 100 replica jerseys within a week and raised K3 million way above the targeted K1.5 million.

The community sponsored team is in parternership with Kaptanspor and Professional Soccer Management of Turkey where they ordered replicas.
In an interview with local media a couple of weeks ago, Chitipa United Team Manager, Watson Kabaghe said they have recieved an overwhelming support from their supporters and non supporters on buying the replicas hence pondering to order a further five hundred kits.

“We underestimated the market at first but we sold them like hot cakes, now we have realised that the demand is high contrary to our anticipation,
We are now odering 500 kits and at first we only ordered home kit but now we are odering away kit because many people are asking for it and this year we are targeting to reach 1000 supporters so as to raise K15 million,” Kabaghe said.

He further said they are exploring other avenues of generating revenue like farming apart from selling replicas. The jerseys were selling at K15 000 each and during the launch of the replicas, on July 18, from which the club managed to raised K2 million.

Apart from the Minister of Youth and Sports Ulemu Msungama, also Minister of Civic Education and National Unity, Timothy Mtambo and Minister of Housing and Urban Development Kezzie Msukwa managed to buy the Chitipa United replicas.

Recently, Msungama challenged football clubs in the country to be robust in resource mobilisation if they are to achieve the commercialisation drive.