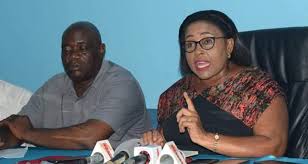 FROM THE OFFICE OF THE SECRETARY GENERAL – DPP

Att: Dr Justice KachaleWe refer to the above and address you as follows: