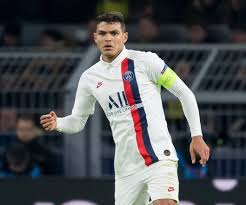 In a bid to to turn around things, Arsenal are interested in signing Thiago Silva from Paris St Germain on a free transfer and David Luiz is acting as an intermediary between the club and his former team-mate.

The Brazilian duo played alongside each other in defence at Paris Saint-Germain before Luiz decided to return to the Premier League.

Luiz has just been handed a new deal at Arsenal and Le 10 Sport claim the centre-back is pushing for the Gunners to snap up Silva on a free transfer.

Silva will leave PSG at the end of the 2019/20 season after signing a short-term contract so he can play in the Coupe de France and Coupe de la Ligue finals and the rest of the Champions League.

Arsenal are on the hunt for bargain deals in the next transfer window having been hit hard by the coronavirus pandemic.

The Gunners are desperate to improve a woefully underperforming defence and Mikel Arteta has contacted Silva about joining his project at the Emirates.

Luiz put Arteta in touch with Silva and is eager for his international team-mate to join him in London.

A new contract for Luiz garnered a mixed reaction from Arsenal fans, but Silva is regarded as one of the most experienced defenders in the world.

At 35, Silva would only be a short-term solution as he enters the final years of his playing career.

Unconfirmed reports indicates that the Gunners have put Guendouz and Lacazette on transfer list in a bid yo rebuild the squad.

Silva is also attracting interest from Everton, where Carlo Ancelotti is in charge.