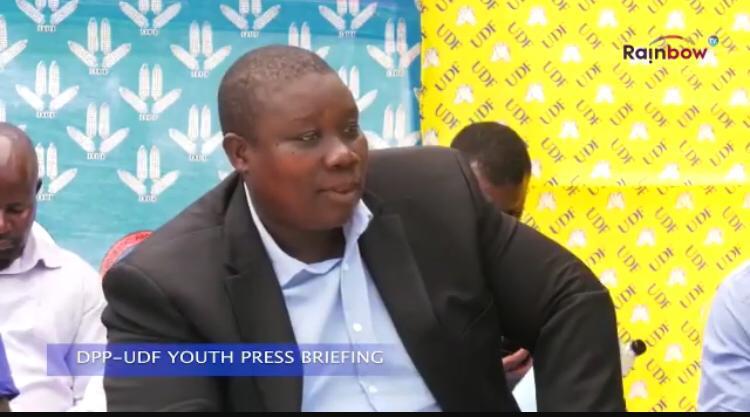 INTRODUCTION
We are still compelled to respond to the Fools Day joke made by some disgruntled so called MCP and UTM youths yesterday in Lilongwe, led by a self-proclaimed IT specialist Daudi Suleman with dubious qualifications, and some other school drop-outs namely Bendulo and Lackson. We do not even think that our senior DPP elders should be bothered with the directionless rantings made by these unemployable fellas from MCP and UTM whose only preoccupation is to engage into a provocative style of politics that thrives on violence and anarchy.
We wish to make it clear that as the Democratic Progressive Party (DPP), we will continue to rally behind our leader and State President Prof. Arthur Peter Mutharika in our unstoppable quest to develop Malawi into a democratic developmental state.
SAME OLD SONG AND CRY-BABY POLITICS
We notice that the MCP, and now lately joined by the UTM, have now mastered the skill of cry-baby politics where they successfully rehearse themselves headlong into an electoral defeat by churning ridiculous allegations before every major election. The political hot air which Daud Suleman and his band of failures produced in Lilongwe, perfectly culminates into the launch of Volume 9 of MCP’s ATIBERA ALBUM, with UTM as their newly recruited supporting artist among the plethora of other nameless wailers masquerading as political parties.
2|Page

It is a new album whose release does not come as a surprise. However, the song and the lyrics therein are all the same as they resonate with the ATIBERA ALBUMS of 2014 for MCP and of 2019 for both UTM and MCP. As a matter of fact, MCP has earned itself a spot in the books of records of political history as one of the longest serving opposition parties in Africa. MCP has vast experience when it comes to politics of opposition such that its spot in Malawi Parliament is permanently reserved.
This is without doubt the reason MCP does not want UTM to be the torchbearer of their fragile MCP-UTM alliance. MCP does not want Saulosi Chilima to become the next leader of opposition since MCP has permanent patent and ownership rights to the leadership of opposition. We are flabbergasted that instead of spending time to fix their broken alliance, these pathetic so-called youths led by Daudi Sulemani are busy inventing lies and manufacturing cheap propaganda against the mighty DPP, in order to hide the cracks in their alliance.
The MCP-UTM alliance will go down in Malawi’s political history as a political arrangement that broke into pieces even before it started its journey. This is because MCP is a party of death and darkness whose record of human rights abuse shall never be erased in the memory of Malawians. MCP killed people, the likes of Attati Mpakati and Mkwapatira Mhango as well as the murder of Aaron Gadama and others at Thambani in Mwanza.
Recently, MCP and its agents have killed our police officer at Nsundwe. We are left speechless that these youths led by
3|Page

Daudi Sulemani can stand today to shield murderers and thugs led by a fallen pastor named Lazarus Chakwera.
Similarly, UTM is a party of violence and anarchy. Within a few months of its establishment, UTM has raided people’s homes, has looted shops, UTM has burnt schools and police stations, all in the name of demonstrations by hiding behind the HRDC. We are worried that the glaring lack of leadership skills in Saulos Chilima is one of the biggest eye sores on our democracy. The Chilima-led violence that Malawi has witnessed in the past months is the unbeatable shame in modern politics.
The MCP-UTM alliance therefore represents a combination of politics of death and politics of violence. This alliance puts our democracy in reverse gear. The alliance puts all our development efforts into immediate retrogression. Chakwera and Chilima are two frustrated individuals who are simply playing politics of vengeance and hatred. It is therefore such a pity that Daudi Sulemani and his trio of failed youths have fallen prey to the self-defeatist politics of the MCP-UTM alliance.
APM AND PROGRESSIVE POLITICS
We wish to remind the MCP that you are the same party that refused and rejected change during the 1992 Referendum. MCP even planned to kill Catholic Bishops. You are the very MCP that said NO to multiparty politics. MCP voted NO and they fought against democracy. It took Dr.Bakili Muluzi, the UDF and others to courageously fight MCP’s dictatorship.
4|Page

Light conquered darkness. This is the sad reality which MCP does not want to tell Daudi Sulemani and his fellow so called MCP youths. MCP will not tell the truth to Bendulo and Lackson that this is the same party that fed people away to crocodiles. This is why we are here as the DPP to caution and advise you Daudi Sulemani and your team before you find yourselves crushed between the jaws of MCP’s crocodile politics.
We are here to take the darkness away and show you the light which comes with the DPP and with our UDF partners. Our great leader President Prof. Arthur Peter Mutharika is a progressive democrat. APM is a developmental leader. DPP believes in development. We believe in democracy not just by word but by practice. APM is advancing progressive politics. This is why today even you Daudi Sulemani and your cohort are able to speak freely and exercise your freedom of expression that is all guaranteed by the DPP administration.
You can even afford to say abusive words and use disrespectful vocabulary on our leader APM. If this was the MCP government, you know too well that you would be at Mikuyu Prison or you would turn into carcass as meat for crocodiles. Under the leadership of APM, Malawi continues to protect and preserve the legacy of constitutional democracy which we so courageously fought for in 1992.
As the DPP, we will therefore not allow or accept a few of you disgruntled and frustrated MCP and UTM youths to take us back to the dark days. We will not fold our arms and watch you Daudi Sulemani to lead our youths astray, to cause anarchy and drive our country into a state of terror. As the DPP, we will hold Lazarus Chakwera and Saulosi Chilima
5|Page

accountable for any political chaos and instability that arises from your insatiable appetite to grab power from backdoor tactics. We warn you Lazarus Chakwera and Saulosi Chilima. Do not abuse our youths. Stop this abuse, NOW!
As the DPP we shall remain vigilant and we will not let you move an inch to stage a political coup d’etat. We have been monitoring all your tactics. You used demonstrations and chaos to grab political power. You failed. You used the Courts. You failed. You used parliament and its kangaroo Public Appointments Committee. You failed also. You even planned to seize power by shutting down the State Houses. This too did not work.
You have now come up with another plan to peddle lies and baseless allegations that DPP is planning to rig the fresh elections. Now, this is laughable as it is unbelievable. The allegations simply reveal your lack of strategy and political maturity. The allegations demonstrate the level of fear that MCP and UTM possess. You are simply looking for another lame excuse with which to rush to the Courts because the DPP will defeat you again at any next elections.
CONCLUSION
In conclusion, as the DPP we wish to strongly warn you. We will no longer tolerate your childish politics. We wish to warn you Mr. Daudi Sulemani and your band of political toddlers
6|Page

that we will take you head on politically if you continue to spit lies and propaganda that is aimed at tarnishing the image of our mighty DPP.
Do not say we did not warn you because we will not leave you scot free when you pour insults on our leader President Prof. Arthur Peter Mutharika. As the DPP, we will defend our leader. We will defend our hard-worn constitutional democracy. We will defend Malawi because we are the DPP, we stand for development, justice and security.
DPP! We are Unstoppable
DPP! We are Unbreakable
DPP! We are Unshakable
Thank You, and God Bless Malawi.
Signed:
Dytton Mussa
National Youth Director Democratic Progressive Party