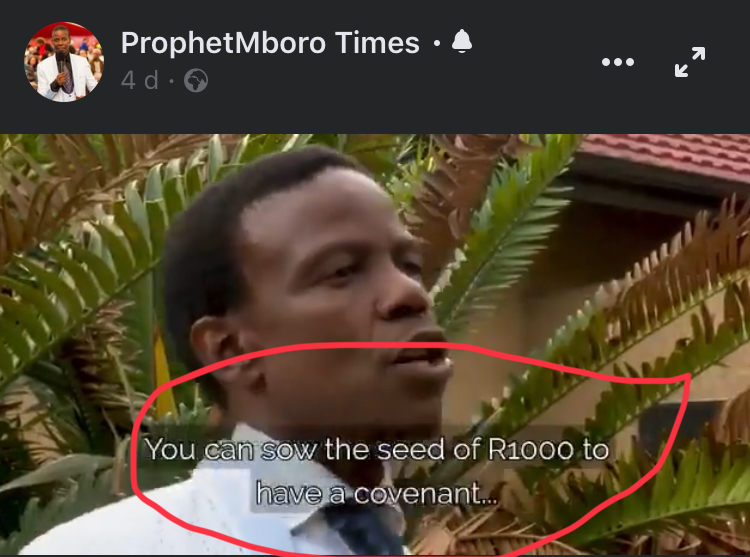 The temptations and situations that are hitting Major Prophet Shepherd Bushiri are tantamount to his strength and capabilities. He is not being tested beyond his limit. Actually, Major One enjoys souring in such storms time and again. The Peter Parker principle says ‘With great power comes great responsibility’.

The term Major One alone attracts Major devils such as Prophet Mboro and all those Major temptations to suit his Major status. What makes him Major One is not just his prophecies, but his capability to stand firmly and steadfast throughout trials and overcome them.

The greatest lie of the devil in Prophet Mboro is to blindfold everyone that he doesn’t depend on church members to finance himself and his ministry whilst directing all those watching his videos to deposit cash into a given bank account on the screen (THIEF).

Prophet Mboro is just jealous that a foreign Prophet is making huge strides in South Africa whilst his own church is accelerating downwards.

Prophet Mboro is accusing Major One and Prophet Lukau of failing to stop COVID-19, whilst forgetting that he ‘Prophet Mboro’ is also a Prophet facing the same scenario. He is simply paranoid. As a fellow Prophet, Mboro should have realised that prophets are not all knowing and all powerful. After all Prophet Bushiri is not the only Prophet or man of God in the world. Therefore the blame of why COVID-19 is not coming to a halt should be collective and not selective.

Prophet Mboro and his cohorts are heading for another losing battle and they will lose badly.

4 thoughts on “Dissecting The Major One, Prophet Mboro Beef”