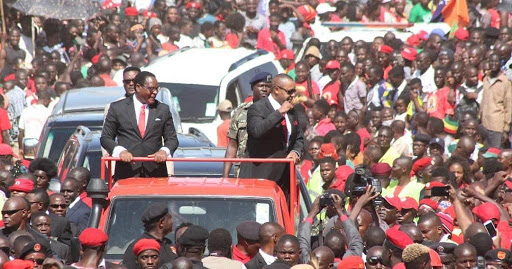 Reports reaching our desk indicate that Democratic Progressive Party President Arthur Peter Mutharika is bitter with Minister of Health Jappie Mhango for failing to foil the MCP/UTM alliance despite giving him K500 million for the exercise.

It is believed that Mhango who is also Director of Campaign for the DPP convinced Mutharika to release the money so that he can use it to give to UTM & MCP top brass and ask them to feed the two parties supporters with wrong information and to join DPP.

“I can confirm that the president has called for an emergency meeting with Hon Jappie tonight after he heard that the MCP & UTM alliance is going ahead to present its nomination papers tomorrow in Blantyre” an inside source from the State House confirmed.

The source said during a meeting this morning with some cabinet ministers, it was agreed that the DPP should get an injunction from the High Court but some of the members declined to agree with the move saying the judiciary is fed up with the conduct of the party and would not in any way grant such an injunction.

The source further said that part of the K500 milliob that Hon Jappie collected is being used to harrass and intimidate MCP & UTM monitors through violence and burning of property for all opposition members that the assigned cadets have on their list.

Ben Phiri who was recently preaching peace at a funeral in Kasungu after his operation to damage MEC equipment was foiled by villagers around the Centre in Dowa. His driver a Mr. Kunje was seen driving one of the three Toyota fortuners terrorizing the registration centers.

2 thoughts on “DPP Fail to foil the MCP- UTM alliance”