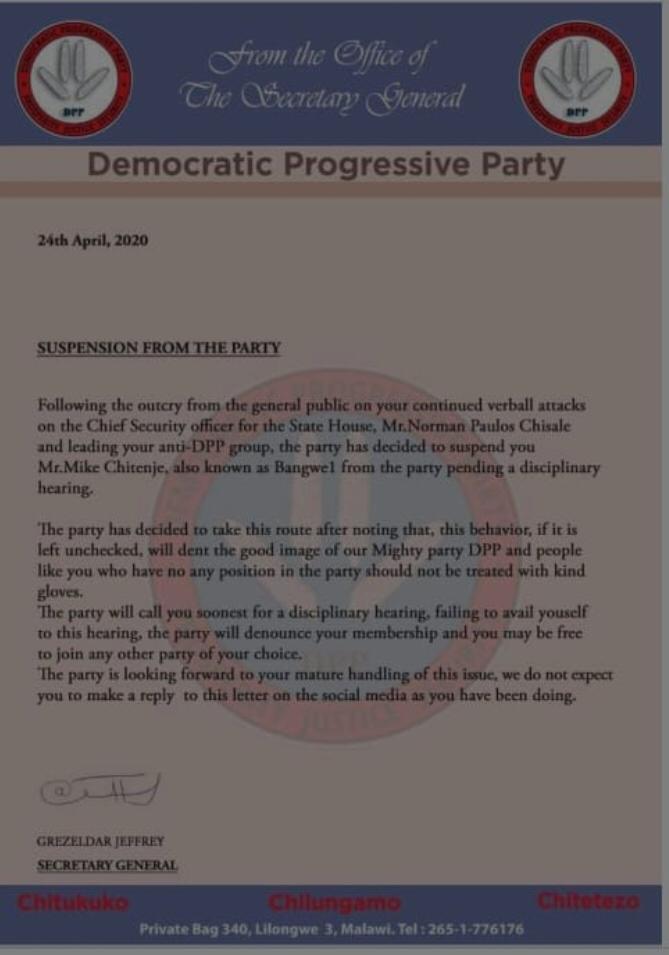 The political bureau of the ruling Democratic Progressive Party (DPP) has finally suspended Mike Chitenje also known as Bangwe One from the party following his continued verbal outbursts against the presidential aide, Norman Chisale.

In a letter signed by the party Secretary General, Grezelda Jeffrey state that Chitenje’s behavior is putting the credibility of the party into disrepute hence no need to be handled with kid gloves.
The suspension letter also informed Bangwe One that he will be summoned for a disciplinary hearing which if he fails to attend the party will be compelled to renounce his membership from the party.

“The party will invite you soonest for a disciplinary hearing and failure to avail yourself for that, the party will go ahead to denounce your membership form the party and you shall be at liberty to join any party of your choice,” reads part of the letter.

Some political observers have also expressed the need for DPP to discipline its executive member, Ken Msonda for publicly accepting to have insulted the High Court judges for their landmark ruling in which they ordered a rerun of the presidential election on February 3rd this year.

But speaking earlier, the unrepentant Chitenje who was at some point arrested by the police on directives from the state house on the same issue vowed to fight on until Norman Chisale is removed from the party and the state house.

In a related development, all is not in the former ruling party, United Democratic Front (UDF) following continued defections and mass exodus of its supporters in the Eastern region who are joining the United Transformation Movement (UTM).

Every meeting, the UTM operatives conducted in the region which is believed to be a stronghold for the UDF has witnessed resignations of top brass party officials and scores of party supporters joining UTM whose leader is Saulos Chilima.