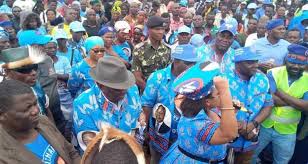 The former ruling Democratic Progressive Party (DPP) has disclosed that all its members who suffered various degrees of injuries during the fresh presidential election on June 23, 2020 are a being taken care for.

The DPP Vice President for the southern region, Kondwani Nankhumwa said this when he was responding to the media in Chirazulu District on the welfare of those injured during and in the aftermath of the fresh Presidential Election

Nankhumwa said his party believes in democracy which is determined by the ballot on the voting day and not violence and torture.

“In any democracy, like Malawi, elections are a prerequisite for the attainment of transparent and peaceful retention or change of government and distribution of power. Political violence before, during and after elections defeats the whole essence of democracy.

“What we saw in Lilongwe and other areas of central region must not happen again in the future if we’re to be a genuine democratic country. Our monitors were seriously injured, intimidated and chased away from polling stations by Malawi Congress Party (MCP) functionaries in the presence security officers,” Nankhumwa said

Nankhumawa also visited some DPP young men and women who were either harassed and intimidated or seriously injured in Lilongwe while they were performing their monitoring duties during the fresh presidential election.

Nankhumwa observed that everywhere in the world, political violence arising from political intolerance and sheer hatred has potentially damaged national unity and cohesion, as well as undermining democratization processes and as such he urged all well-meaning political leaders in Malawi to preach peaceful co-existence among Malawians of diverse political views.

“We must promote a culture of political tolerance at all levels of our society. As Bingu (late former President) said, the past is for us to learn from and the present for us to manage; let us learn from our past mistakes and sojourn on as one nation devoid of political intolerance.

During the visits Nankhumwa conveyed a message of goodwill from former president Professor Arthur Peter Mutharika to the injured DPP cadres and their families.

He said although the DPP leader had not received a full report of exactly what happened, he is aware of the pain and suffering that the victims and their families are going through since the incidents happened.

One of the injured cadres, Enrick Sitima, a Catholic University student, narrated his ordeal in a heartbreaking manner, saying on that fateful day, he faced roughest time of his life. He was a polling centre in Area 25 in Lilongwe.

“They said we were out there to rig the election. When my colleagues and I explained that we were mere DPP monitors, they could not listen and attacked us mercilessly. At some point, they wanted to set us ablaze. We miraculously found ourselves at the police station before we were taken to Area 18 Clinic before being referred to Kamuzu Central Hospital.

“I am slowly recuperating but I still have severe pains especially in my back; I walk around with much difficulty,” said Enrick, who was accompanied by his mother and father at their home near Chiradzulu Boma.

Nankhumwa said he visited the injured monitors to get first-hand information of what really happened. He was glad he did and that he would brief the DPP leadership for further remedial action.

Meanwhile, Nankhumwa donated money to all victims primarily to undergo radiological investigation and other medical interventions.