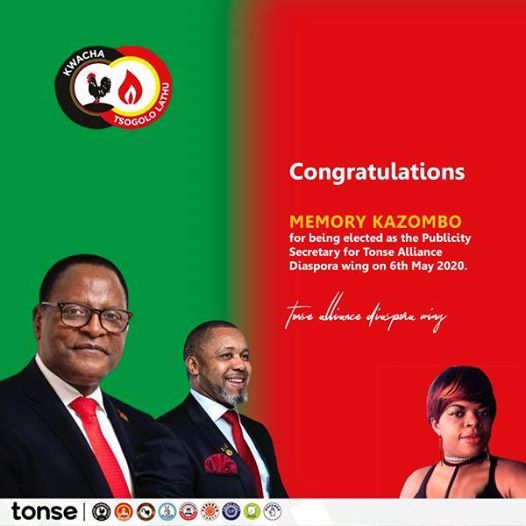 Tonse Alliance members in diaspora have a new leadership now.

31 year old, Health Care worker based in Dublin, Ireland Memory Kazombo has been appointed Publicity Secretary of the diaspora team advocating for change of government in the impoverished southern African nation, Malawi.

Accepting the appointment, Kazombo who is also one of the founding members of VOMI NEWS 247 and it’s subsidiaries says she don’t take for granted the trust of the Tonse leadership it has demonstrated for her.

“We put our country first though we’re a group of Malawians living across the sea, I don’t take this for granted and am really grateful for this appointment,” Kazombo said.

A nurse from Portobello Institute who among others holds a degree from ICD college has been a pioneer of several entrepreneurial and charity works that have assisted in alleviating the suffering of some Malawians back home.

Kazombo’s switch to Tonse Alliance is one of the sad news for the ruling Democratic Progressive Party (DPP) and it’s alliance partners, United Democratic Front (UDF) who are in great need of prominent figures to join their political band wagon.

Efforts to talk to the spokesperson of the DPP and UDF on Kazombo’s switch to the opposition allegiance proved futile since their mobile phones have been out of reach since midnight. Malawian time.

Meanwhile, Kazombo has joined the diaspora, Tonse Alliance leaders who have just been appointed in a number of countries such as United Kingdom, Canada and United States of America.