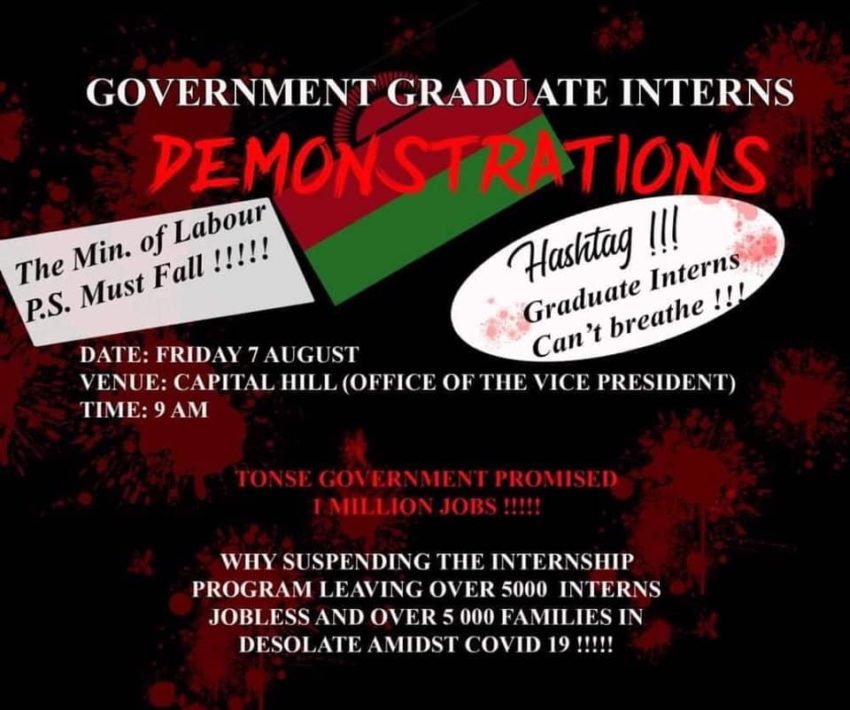 Government through the ministry of labour has started playing hide and seek with the internship graduate program which was introduced by the DPP government as one way of mitigating unemployment and equipping the graduates with job experiences.

Through a press release issued on Wednesday, signed by the secretary for labour, Dr. Emie Kainja, government announced the shift in dates when the graduate interns in the first and second cohort will report to work.

The release stressed that all the interns will have to report to work on 1st October instead of 3rd August 2020 as an additional measure on the Covid-19 pandemic set by the government.
“The Presidential Committee on covid-19 has advised government to operate at 5 percent due to the upsurge in the number of cases infected by the virus.

This advice is also consistent with the earlier petition by the leadership of the interns to my ministry that government extend their contracts into the third year as a result of workplace restriction related to the pandemic resulting in deprivation of work experiences, ” reads part of the press release.

Meanwhile, government says it will continue observing the Covid-19 situation in the country and will advise interns on any further information. .

The national executive committee of the interns has since vowed to engage government to reconsider its intentions of keeping them home a little longer.

This comes as most of the graduate interns have been earning a living through the program.

In a communique dated 5 August 2020 posted on the intern”s social media forums it says committee is doing all efforts to find out why the recent press release from the Ministry of Labour is like that.
“The NEC will negotiate a shift of readmission from October to as soon as possible, If all fails NEC will organise demonstrations.
As all efforts are being made, NEC assures all support for every idea raised. Let’s all fight for one course remember united we stand divided we fall,” reads the memo.

The Tonse Government has been promising 1 million jobs in its manifesto and through its provisional budget it said it will continue and expand the graduate internship program.

With the shift of days in readmission and to sign contracts for the interns, they have been told not to report for duties until their contracts are dully signed and approved by the ministry of labour.

2 thoughts on “Government Playing Hide and Seek with Interns”