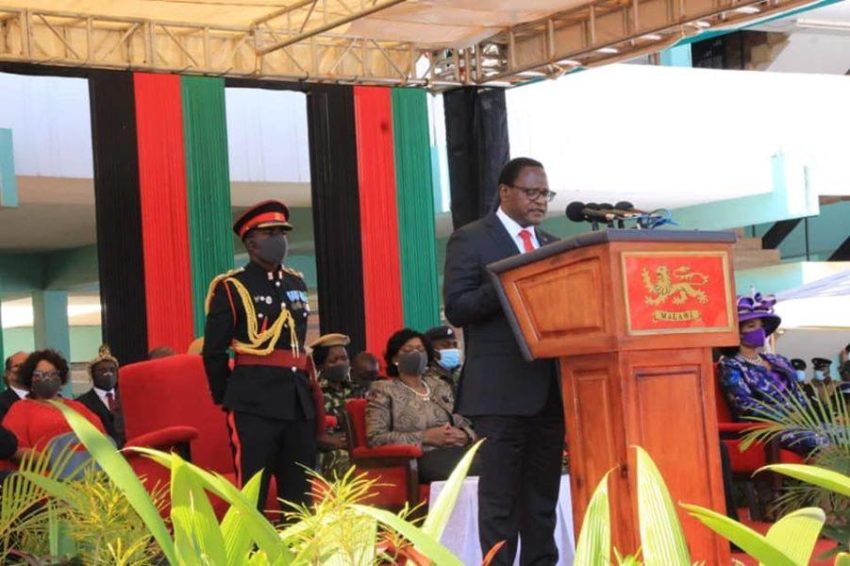 My Fellow Citizens,Two score and sixteen years ago, our nation was born. It was a birth that I myself bore witness to, for not only was I a young boy of nine on that day; I was also one of only 4 million people to have gone to bed a Nyasa the night before and rise the next morning a Malawian.

Of that generation, only half of us remain, and with each passing year, our numbers fall as we continue to pass the baton of turning our land into a great nation to the next generation. To facilitate this transfer, four men and one woman from among those of us who were the last to be called Nyasas have thus far been entrusted with the presidency of Malawi.

And now, after 26 years of false starts and stale finishes, it is no secret that my generation has not only left our homeland unbuilt, but also in ruins. It is because of these ruins that our first task in building a new Malawi is clearing the rubble.

The ruining of national treasures of both nature and state is a sin of my generation that I am bound by God to confess and bound by you to correct . For this reason, we must not imagine that it is possible to make these corrections without pain.

We must accept that the national bones we havedislocated cannot be corrected without suffering. I was reminded of this truth three months ago when my 12-year-old grandson suffered a greenstick fracture in both arms after falling badly in school. To straighten the bones, an orthopedic surgeon at Kamuzu Central Hospital had to apply enough pressure to the arms to administer healing through pain and tears.

In our quest to heal our fractured nation and governance system over the next five years, we must do the same. We must have the courage to face and endure the pain of systemic surgery if we ever want to enjoy wholeness as a nation. We must have the courage to inflict necessary pains on the fractured attitudes and actions of those around us if we ever want to see them whole as citizens.

We cannot absolve ourselves of responsibility for the maladministration we have allowed to happen on our watch for close to three decades any more than we can renege on our responsibility to make amends.If this collective sense of responsibility over our national sins and national solutions seems unnecessary to you, then I put it to you that it is not only a necessary path, but the only path.

No! So long as I am President, I will insist that no new Malawi must be built except that which is built by Malawians.The collective ownership of our problems and collective participation in fixing them is the bedrock of our Tonse philosophy. When we promise to create 1 million jobs, we do not just mean that we will create programs to employ you, but also that we will challenge you stop seeing yourself as a job seeker and start seeing yourself as a job creator.

When we promise to ensure that every household is able to eat three meals a day, we do not just mean that we will give you cheap fertilizer to increase food production, but also that we will challenge you to work three times as hard in your fields as before.

When we promise to give 1 million youth and women capital to start their own businesses, we do not just mean that we will link them to markets and banks to leverage their gains, but also that we will challenge them to pay back the loan so that another person has access to the same opportunity.

To reach this inauguration as State President and State Vice President, Dr. Chilima and I have ridden the wave of indispensable contributions made by fellow Malawians who each rose to the occasion in different capacities to lend their hand to the cause of justice. Without the patriotic efforts and sacrifices of these Malawians, none of us would be here.

If it were not for the courage of the Human Rights Defenders Coalition galvanizing citizens across the country to sustain protests for ten months straight despite the constant threat of arrest and cloud of teargas under which they marched, none of us would be here.

If it were not for Dr. Chilima and the other party presidents of the Tonse Alliance forfeiting their political aspirations to forge an unbeatable partnership at the polls, none of us would be here. If it were not for thousands of knees scraping floors across this country in night long prayers that gave heaven no rest until God’s kingdom came, none of us would be here.

I could go on and on, but the point would remain the same, that it is the Tonse Philosophy of collective responsibility that brought us to this milestone and it is that same philosophy that will bring us to the next. Building a New Malawi will have to be a team effort every step of the way.

And when we have differences, we will still have to listen to each other and accommodate each other, for we have no other compatriots in all the world than each other. And when you see another citizen who is not doing their part in the work that is in front of us, accept it as your duty to the country to rebuke them and help them reengage in the process of nation-building.

In the same way, when you see another citizen who is making great strides in transforming their home, or their neighborhood, or their village, or their workplace, or their business, or their country, accept it as your duty to the country to celebrate and reward them without succumbing to jealousy and mudslinging.

In equal measure, whether you live here or abroad, when you see a foreigner exploiting any of your fellow citizens or trashing the country you call home, accept it as your duty to the country to stand up for the flag and speak of the unsung beauties of this land God has preserved as our national inheritance. We must each give our best for Malawi and do our best for Malawians.

Today, I too promise to give this country my best and do my best for you as your servant. More importantly, I promise to set a good example of submitting myself to the constitutional processes, provisions, and institutions that are designed to ensure that the President and Vice President are always at their best.This means that as required by law, I will make a full declaration of my assets each year; I will go to Parliament to be questioned by the People about my handling of state affairs;

I will propose legislation to reduce the powers of the presidency and empower institutions to operate independently, including Parliament and the Anti-Corruption Bureau; I will meet with the Leader of Opposition personally every three months to listen to alternative ways of running government affairs; and I will operationalize the Access to Information Act in order to end the era of government secrecy and usher in the dawn of government accountability.

As I seek to be at my best through these measures, you can also count on me to challenge all of you to be at your best. I will challenge the leadership of the judiciary to do more to root out the culture of corruption and selective justice that has shipwrecked too many of our lowest courts. I will challenge those who sit in Parliament to act professionally, put away childish ways, and repeal and replace the bad laws that remain on our books.

I will challenge civil society organization to maintain a culture of robust protest, not just against governance institutions, but against any entity that is on the wrong side of justice. I will challenge our development partners to respect our vision and plans for our own country and to partner with us in ways that respect our dignity and sovereignty, not ways that undermine it.