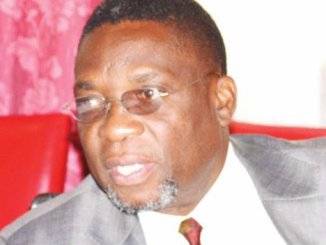 Minister of Lands, Housing and Urban Development, Kamlepo Kalua on Friday became a handle of contradiction when he told journalists in Mzuzu that he has not joined the ruling Democratic Progressive Party (DPP).
Kalua who has been a fierce government critic dating way back from pre-democracy era failed to distinguish being a DPP member and a Minister serving in Peter Mutharika’s government at the moment when everyone co-opted into the cabinet has to campaign.

He said that all what he knows is that he is a cabinet Minister and he will soon launch his campaign which by all means will help Mutharika to return power come July 2 presidential election.

“These young ones will not withstand the heat when I embark on a serious campaign, I will campaign along side the DPP machinery. I cannot work with MCP or UTM because I am not for any political party. I am Kamlepo Kalua,” Kalua said

The visibly jovial Kalua who came at the meeting very late even after the arrival of the guest of honor, the DPP northern region’s vice president, Goodall Gondwe was received by chanting party cadets calling, chweee mwana chweeee!!!

Also speaking to the media the Regional Governor for the Northern Region, Mzomera Ngwira said when Mutharika wins the forthcoming presidential election the UTM leader Saulos Chilima alongside his alliance partners, Lazarus Chakwera will run away from the country.

“Let me assure you that when Mutharika return to power after the July 2nd presidential elections, Chakwera, Chilima and Ntambo will run away from the country, and I can assure you that,” Ngwira said.

During the interview with the media, a man who confessed to have been behind a spate of all sorts of criminal activities during demonstrations, Boniface Kachololo announced his joining of the ruling DPP where he said will work under a new wing called, DPP Young Achievers.

And commenting on the development, the Human Rights Defenders Coalition chairperson for the north, Happy Mhango said now is the time for police to pounce on people like Kachololo who were being sent to cause trouble during the HRDC led demonstrations.

Police is yet to comment on the remarks made by Kachololo and possibly effect an arrest for causing injuries, malicious damage and conduct likely to cause bleach of peace considering that he has not yet faced the wrath of law despite joining the ruling party.