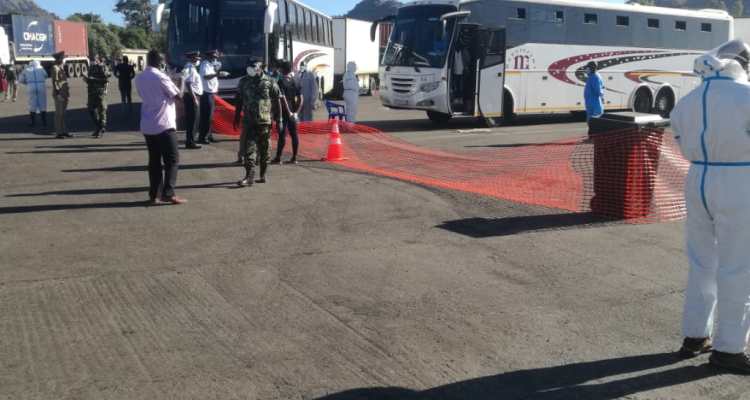 Hello!
I am one of the people who traveled from RSA with the buses that have just arrived and my heart is so bitter with the way government has handled us. First of all anthu we paid for our own transportation those buses were not for free. And we paid double the normal price. Then the dates kept changing as we were being told that we need to get tested first. Of which the buses operators made sure we did and that was Business logistics we don’t know if Munoururama did the same but am sure they must have.

Then the long awaited journey started on Thursday the 21st. In Zim they screened everyone again before allowing us entry to cross. And all the 9 buses including a Munoururama were on a convoy with a police Escort from Beitbridge Zim side to Nyamapanda. From there in Mozambique it was same case they escorted us to our boarder Mwanza. When we got to Mwanza Sunday evening we were told not to get out of our buses until they tested us. Of which we complied. Monday morning they tested us and told us to wait for 8hrs. Then in the evening all the buses were driven to Kamuzu stadium. Mind you all this while no one from the Government had come to address us to tell us the whole procedure or welcome us or at least update us on what was going on or where they would take us. Timangomvana tokha tokha kuti akuti this akuti that and we would just follow.

The buses were driven into Kamuzu stadium and parked there basi no update mpaka kunacha Tuesday morning. We just saw more police came and the Army built some tents for health officials to be working in. Later in the morning ya Tuesday we saw a health walking in and out the tents doing their own things then we started asking them for our results as 8hrs had passed in fact it was now 24hrs. There are no bathrooms in the stadium.. We had no food no water the toilets were in such in such a bad mess. The videos you see pipo shouting and all we were not demanding to escape but rather demanding for our results so we can safely go home and show our relatives ma results a Malawi kuti tisakasalidwe. But they told us results are not yet out.

While we were still waiting we were shocked to see reports on social media talking about number of pipo being found positive and having been isolated from us yet we were still being told results are not yet out. We were now starving, and being kept like prisoners inside the stadium expecting us to be using the buses as our beds? That was when pipo now became angry and started demanding response of which nothing happened mpaka in the afternoon now pipo started leaving. I for one stayed behind till 7pm still no results and no word from the health department or from government to address us if this meant we were being quarantined there or what.

I left the place and chose to do self quarantine and I intend to do it for 14days. I can’t speak for others if they really will do self isolation. But we all left our details, contacts and where we stay. If they want to find everyone they can easily do so. Our country has failed us. Atleast if they had taken us to a boarding school and kept us there… At least if they could have addressed us and told us what was going to happen and also what was really going on.

At least they could have been providing food for us not kungobweletsa chakudya once a day without even madzi okumwa. Much as we are not sick but we were willing to follow the right procedure before being reunited with our loved ones… So before Malawians start pointing fingers at us they must know the truth of what really happened…..