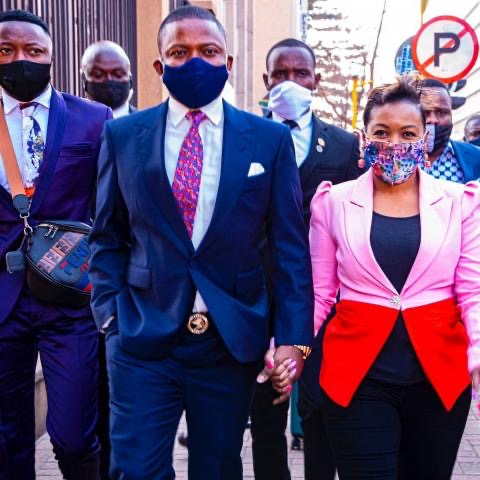 Several legal experts both from Malawi and South Africa says Bushiri’s extradition could be uphill battle considering that the two countries have no pact on extraditions.

Talk of the issue come on the hills upon news that Malawi’s self proclaimed prophet Bushiri alongside wife Mary have handed themselves to tge national police headquarters after the International Police Corporation issued a warrant of arrest for two.

Speaking on one of the South African television channel one of Malawi’s celebrated legal practitioners, Wapona Kita clearly stated that the pacts to which Malawi is signatory on issues of extradition are not an automatic qualification to extradite people wanted in other countries.

Kita stressed that Southern Africa Development Community (Sadc) protocol on extradition is not part of the laws of Malawi to necessitate extradition of an individual between the two countries.

Also the South Africa’s immigration and extradition expert Gary Eisenberg said that Prophet Shepherd Bushiri is a very clever and well-informed man and Nthakoana Ngatane a senior political reporter for Eyewitness News who published an opinion article which she states that South Africa may get a taste of its own medicine in its bid to extradite the preacher and his wife, Mary, from Malawi if cases of other countries waiting for Pretoria to hand over accused persons and fugitives is anything to go by.

Bushiri and his wife Mary were out on bail after being arrested for their alleged involvement in fraud and money laundering worth over R100 million.

The Pretoria Magistrates Court granted the Bushiris bail, convinced that they were not a flight risk. But the court has since revoked the bail and issued an arrest warrant after it emerged that they are now in Malawi.

“What applies here is the SADC Protocol on Extradition and if you look at it closely, you’ll find Article 4 which will prevent the Malawian government from extraditing Bushiri,” Eisenberg said while speaking to CapeTalk’s Refilwe Moloto on Monday morning.

The immigration expert said this was because Bushiri may never receive a guarantee of an impartial trial in South Africa.

“When you listen to his demands, Bushiri is invoking article 4 of the SADC Protocol and it’s totally in his rights to do so. So, he may have the last laugh,” Eisenberg added.

In a published article, journalist Ngatane stated that the extradition could be an uphill battle.

“Over the past decade alone accused persons and fugitives wanted by other SADC countries remained in South Africa, and in some cases, the processes had taken more than 10 years to conclude,” she wrote.

She concluded: “ So, while South Africa could begin the process to extradite the Bushiris and cite the SADC protocol, it could be years before any conclusion is reached.”

Qatar-based Malawian trained lawyer Timothy Nundwe also commented on his Facebook page: “The Malawian cashgate crook (Limumba Karim) was partying in RSA after skipping bail. Some of you were quiet. Don’t scream toom much [on] Bushiri.”

“So South Africa flouted the same rules they are signatory, and they want to push Malawi to comply? And they expect us to extradite our own son? No ways Major 1 is going nowhere,” wrote the member of parliament for People’s Party (PP) led by former president Joyce Banda.

Bushiri has said that he had returned to Malawi because they believed that their lives were in danger in South Africa.

He also claimed they would not receive fair trial.