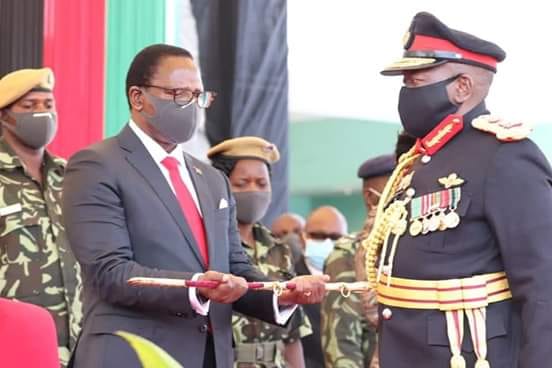 His Excellency the State President Dr. Lazarus McCarthy Chakwera has instilled passion for hardwork in the process of building a new Malawi that will be enjoyed by all.President Chakwera made the call on Monday at Kamuzu Barracks in Lilongwe during his inauguration ceremony.

It is because of these ruins that our first task in building a new Malawi isclearing the rubble,” said President Chakwera.The President said upholding the rule of law will be his utmost priority and would love to see the independence of the Judiciary and Parliament to thrive.

He said for the first time his administration will break the tradition of government secrecy by declaring his assets together with his vice Right Honourable Dr. Saulos Klaus Chilima.

The Malawi Leader said there’s need for collective responsibility to build a new Malawi by resolving issues and holding accountable those who act in retrogression to aspirations of the whole nation.”When we promise to build new homes with a solid roof, electricity, and tap water, we do not just mean that we will bring investors to make this happen, but also that we will challenge you to work towards owning that home. ” When we promise to give 1 million youth and women capital to start their own businesses, we do not just mean that we will link them to markets and banks to leverage their gains, but also that we will challenge them to pay back the loan so that another person has access to the same opportunity.

“The Tonse philosophy is not a campaign gimmick, but a governing philosophy that says: we either build together or crumble together,” Said President Dr. Chakwera.The President spoke tough that it’s time we roll up our sleeves and get to work. Idleness shouldn’t be tolerated.”The time of giving free handouts and rewarding noise makers and handclappers who are too lazy to work is past.We have a country to build and not a moment to waste.

So let’s all get to work ! ” Emphasized President Chakwera.This year’s Independence Day celebrations scheduled for Bingu National Stadium were cancelled as a safety measure in light of COVID-19 pandemic.Right Honourable Dr. Saulos Klaus Chilima and other invited guests attended the function.Malawi attained it’s Independence from British rule on July 6, 1964.