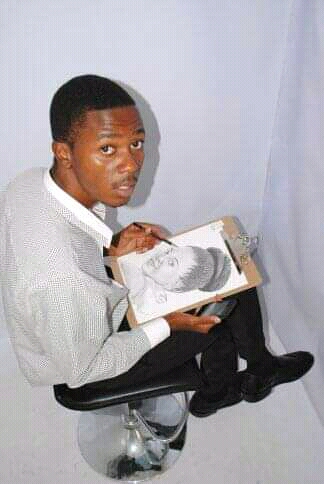 Lovemore Mponda is a visual artist based in Malawi’s commercial city of Blantyre. He specialises in graphite/charcoal portraits. He is the first-born of the three sons of Mr and Mrs Mponda born on 27th October in 1992 at Thyolo district hospital, southern Malawi. He’s as well originally from Thyolo district in the area of Traditional Authority Chimaliro.

He grew up as a child of a health worker at Thyolo district hospital. Lovemore did his primary education at Nachipere, Bvumbwe and January schools respectively and was later selected to Thyolo Secondary School where he did his secondary education from 2006 to 2009.

The portrait art career begun with drawing famous firm actors and musicians such as Bruce Lee, Arnold Schwarzenegger, 50 Cent, Mandoza, Lucius Banda and many other celebrities of that period.

After secondary school Lovemore concentrated on art as he had enough time then. During this after-school period he focused on drawing from reference photos and not imaginary things. He drew portraits of himself and newspaper and magazine models one of which was one of late Miss Malawi, Faith Chibale who had appeared in Malawi News on Model of the Week page.

He was later picked to do a Bachelors degree of Education -Languages with Chancellor College of The University of Malawi. This gave him an opportunity to study Fine Art as part of his combination. Lovemore has worked as a part time art teacher for special students and schools such as Imperial International Schools in Blantyre where he is based.

Lovemore has struggled to make the works of his hands adorable through extreme practice and online marketing. So far Lovemore Mponda is now considered one of the best portrait artists in Malawi. He has done lots of commissioned portraits of so many famous people and organizations including Dr Atupele Muluzi -President of United Democratic Front (UDF), McDonald Chibwe -C.O.O of United General Insurance Company, Ruth Kulaisi Chikoleka of Zodiak TV and Rose Chibambo just to mention a few. Lovemore has sold portraits to as far as USA and the UK. Apart from portraits the artist also produces acrylic paintings of village scenes, landscapes, wildlife and abstracts.

This is a product of VOMI News 247

2 thoughts on “Meet VOMI’s Personality Of The Week (Malawi)”