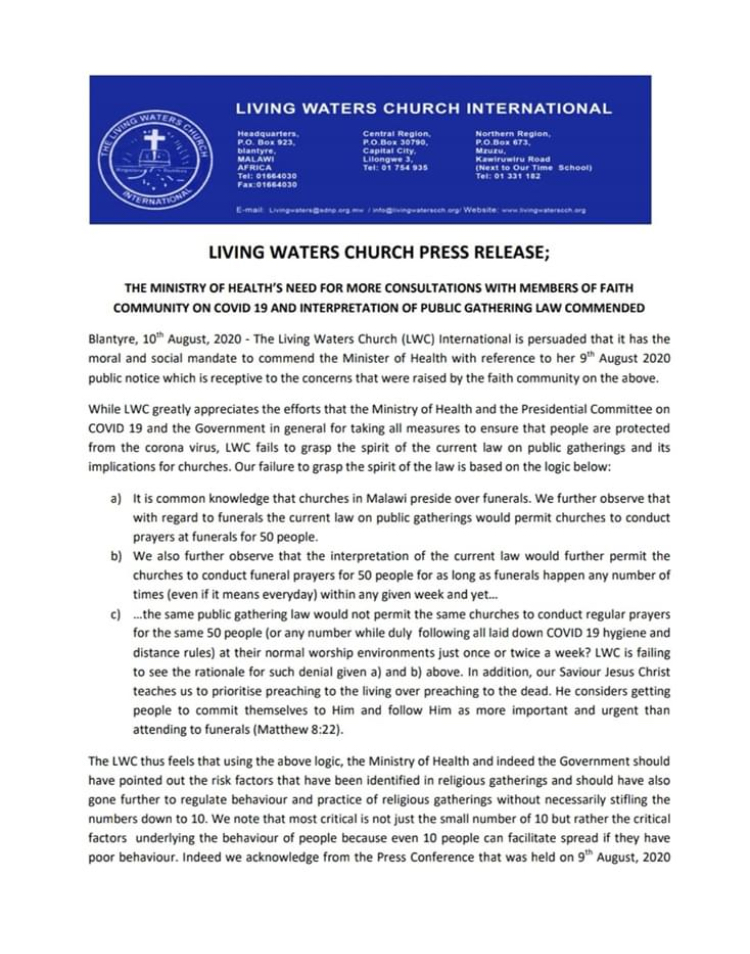 Blantyre, 10th August, 2020 – The Living Waters Church (LWC) International is persuaded that it has the moral and social mandate to commend the Minister of Health with reference to her 9th August 2020 public notice which is receptive to the concerns that were raised by the faith community on the above.While LWC greatly appreciates the efforts that the Ministry of Health and the Presidential Committee on
COVID 19 and the Government in general for taking all measures to ensure that people are protected from the corona virus, LWC fails to grasp the spirit of the current law on public gatherings and its implications for churches. Our failure to grasp the spirit of the law is based on the logic below:

a) It is common knowledge that churches in Malawi preside over funerals. We further observe thatwith regard to funerals the current law on public gatherings would permit churches to conduct prayers at funerals for 50 people.
b) We also further observe that the interpretation of the current law would further permit the churches to conduct funeral prayers for 50 people for as long as funerals happen any number of times (even if it means everyday) within any given week and yet…
c) …the same public gathering law would not permit the same churches to conduct regular prayers for the same 50 people (or any number while duly following all laid down COVID 19 hygiene and distance rules) at their normal worship environments just once or twice a week? LWC is failing to see the rationale for such denial given a) and b) above. In addition, our Saviour Jesus Christ teaches us to prioritise preaching to the living over preaching to the dead. He considers getting people to commit themselves to Him and follow Him as more important and urgent than attending to funerals (Matthew 8:22).

We note that most critical is not just the small number of 10 but rather the critical factors underlying the behaviour of people because even 10 people can facilitate spread if they have poor behaviour. Indeed we acknowledge from the Press Conference that was held on 9th August, 2020