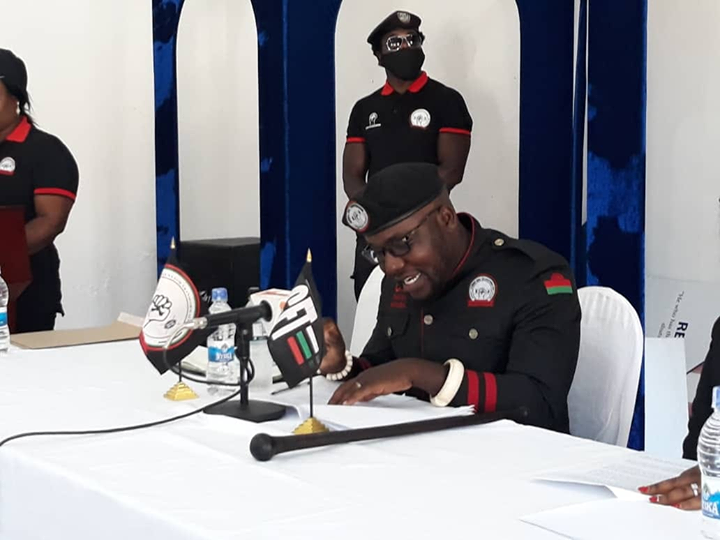 THANKSGIVING FOR THE REMOVAL OF ACCIDENTAL, CORRUPT AND DESPOTIC DPP LEADERSHIP FROM STATE POWER,

TIME TO BUILD A PEOPLE POWER DRIVEN RESILIENT AND DEMOCRATIC DEVELOPMENTAL STATE
Good Morning members of the press and all Malawians watching and listening to our press briefing this morning. We called upon you, as usual, because there are a few issues of national importance that we would like to address as CFT.
First and foremost, I would like to congratulate you, the people of Malawi for a successful credible, free and fair Fresh Presidential Election on the 23rd of June 2020. The quality of this election and the demand for electoral justice through fearless and resilient mass street protests and legal battles that preceded the election that demolished the despotic, nepotistic and corrupt regime of the Democratic Progressive Party has earned you, the people of Malawi, a high place on the global democracy scale. It has brought, unto our nation, great respect and admiration from across Africa and the rest of the world. Malawians and their country have become the beacon of hope for the growth of real liberal democracy on the African continent – and that gives us the latitude to feel proud of ourselves as a nation.
This electoral victory belongs to all of you the people of Malawi, regardless of your region, tribe or religion. Together we made it happen. I say, congratulations Malawi, once again.
Secondly, we would like to congratulate, in general, all fellow members and partners in the Tonse Alliance, and in particular, His Excellency, Dr. Lazarus McCarthy Chakwera and Right Honorable Dr, Saulos Klaus Chilima, for the deserved electoral victory. We made a choice to stand with the suffering Malawians and it is based on that choice we made, that the people of Malawi chose to give us the power to govern them. They have entrusted us with this sacred responsibility with the hope that we will make a difference in their lives and create a better Malawi for everyone, regardless of who they are or where they come from.
We sincerely thank the efforts by HRDC for organizing and galvanizing the citizens to hold leaders accountable. The citizenly truly lived the wise words of Martin Luther, which says and I quote:
“Human progress is neither automatic nor inevitable… Every step toward the goal of justice requires sacrifice, suffering, and struggle; the tireless exertions and passionate concern of dedicated individuals.”

It is impressive when the President commits to submit himself to the people via the Parliament to be questioned about his handling of State affairs.
It is remarkable when the President commits to seize his policy initiative authority to propose Legislations that are going to finally reduce the powers of the Presidency.
We are excited to hear that Governance institutions, such as the Anti-Corruption Bureau and the Malawi Police Service, will get fully empowered so as to operate independently and effectively for a professional service to the country.
Millions of Malawians who are not connected to any politician or public servant can now feel safe and confident that their hard work will pay and that collective spoils of the country will reach them through equitable and efficient public service delivery across the country.
It is inspiring and exciting to hear that the President will be periodically having an interface with the Leader of Opposition to listen to diversity and alternative ways of running government affairs. That is meaningful inclusiveness.

That signifies the arrival of the new dawn, which Malawi and all democratic establishments across the globe have always dreamed of. It can’t feel any better to be a Malawian where a Third Republic seems to have truly been born!

CFT would like to appeal to the leadership and the Tonse Alliance partners represented in Government and the administration to quickly get to work. Malawians have already wasted more than 12 months with the struggle to establish a legitimate government. We do not have any more time to waste.

Among several areas of priority is the establishment of governance framework that would enhance the rule of law and the preservation of human rights for the people of Malawi. Implementation of justice MUST be among the top priorities whereby Malawi should recover what she had lost to looters and plunders.

In that regard, CFT would like to see the new administration quickly enabling the instruments of law enforcement to investigate and prosecute those who have plundered and hurt this country in so many ways.
We would like to remind the Government that there is a purpose why justice was created without eyes and feelings. It is meant to run indiscriminately and feel no mercy towards anyone. The Government should, therefore, not attempt to forgive those who have plundered this country. Those that looted and criminally injured us as a nation, regardless their age and status in society, must be impartially subjected to the law enforcement agencies until they are all brought to book. We are all equal under the law and justice must never be sacrificed at the altar of political expediency.
For avoidance of doubt, all ill-gotten wealth that was looted from public vault must be restored back to the people of Malawi. Considering the urgency of the matters and likelihood that ACB will be overwhelmed, we recommend that there should be an Asset Recovery Taskforce headed by competent and patriotic Malawians to recoup any mone…