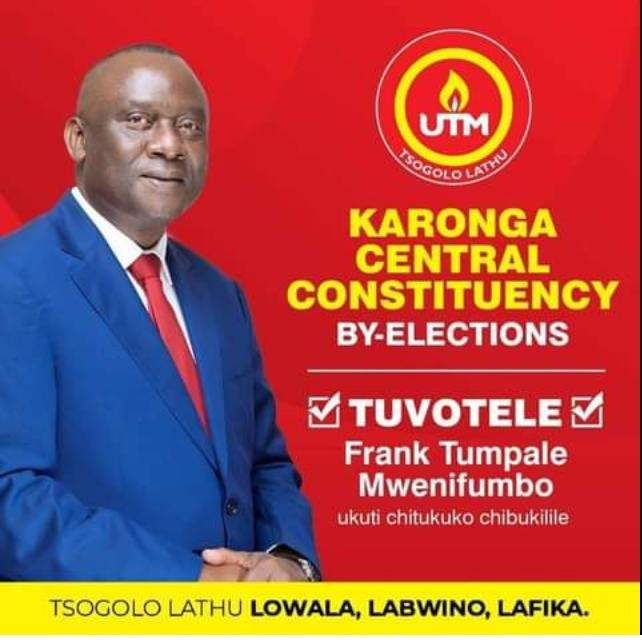 What was meant to be a primary election for two UTM candidates, Mary Nthakomwa and Frank Tumpale Mwenifumbo, turn out to be a mere endorsement for Mwenefumbo after Nthakomwa withdrew from the race.

Nthakomwa pulled out of the race in the leventh hour citing among others lack of transparency in the management of the party primary poles.

Nthakomwa alleged that the party was siding with Mwenifumbo, an allegation which the Regional Governor for the north Moses Mlenga denies.

“Wehave all along made sure that the field is leveled, Nthakomwa never expected to face a giant in politics of Frank Mwenefumbo ‘s calibre but the most interesting thing about both of them is that the love the party,” Mlenga said.

However, there are reports indicating that Nthakomwa, who was the party’s candidate during the 2019 election, will contest on an independent ticket.

UTM deputy director of elections, Bright Kawaga said the party has no option but respect her wish.

“Since the other candidate has withdrawn the candidature, so with rules Governing elections in UTM the candidate who has fulfilled all the necessary requirements is declared winner and his name will be submitted to the Malawi Electoral Commission as our candidate,” Kawanga said.

Meanwhile, Mwenifumbo said will try to reach out to Nthakomwa so as to work together for the good of the party and development in the constituency.

MEC will hold by-elections in five Constituencies on 10 November this year, which fell vacant for different reasons.

1 thought on “Mwenefumbo Endorsed As UTM Candidate in Karonga Central”