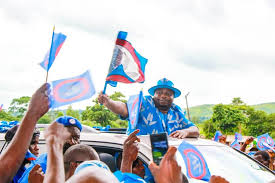 As the wrangle for leadership succession rages on in the former ruling Democratic Progressive Party DPP, indicators have shown that leader of opposition and Mulanje Central Parliamentarian, Kondwani Nankhumwa has become the most popular candidate among all vying for the post of party president.

About 45 Democratic Progressive Party (DPP) members of parliament out of 60 have openly demonstrated their support for Nankhumwa in wrangles which are creating divisions in the party with another group supporting the candidature of the less popular, Mulanje-southwest Parliamentarian, George Chaponda.

Our investigation team has also established that those working towards the candidature to succeed Peter Mutharika have already put in place underground networks and politburos facilitating a smooth campaign for their candidates.

From the results gathered so far clearly puts, Nankhumwa in pole position to take over the leadership mantle from Mutharika who now seems to be supporting the candidature of the Mulanje South-west Parliamentarian, George Chaponda.

It has also been established that Mutharika, Chaponda and the party spokesperson, Brown Mpinganjira have also intensified their support in party’s regional committees where Nankhumwa seems to have already polluted with his sweet campaign talk.

Three senior DPP regional committee officials who did not want to be mentioned for fear of reprisals confided in our investigation team that all is set and even if the convention could be called on the day of the interview (Thursday) they already had a candidate to vote for.

“We are just waiting for an announcement as to when the elective conference will be held, otherwise we already have a candidate to vote for come the voting day, we want to rebuild the party with energetic leaders whose candidature is not in compromise with the track record,

“And during that convention it is when we shall demonstrate to the current leadership that it was very unfair to remove our General Secretary (Grezelder Jeffrey) from her position because it is not a secret that officials in such positions can only be removed by a convention and nothing else,” he said.

A couple of weeks ago, DPP officials in the Northern Region made an appeal to call for an elective general conference that could consider electing Mutharika’s position