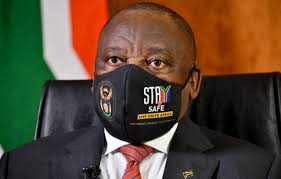 There is no significant progress in the fight against Coronavirus in South Africa, a development which has forced government to tighten up strict measures aimed at curbing the virus.

In view of the pandemic, President Cyril Ramaphosa on Sunday night declared that South Africa would not go back to a hard lockdown.

Speaking during a national address, broadcast live on South African Broadcasting Corporation (SABC), Ramaphosa said that going back to a level 4 or level 5 lockdown “would not necessarily achieve a significant reduction in the rate of transmission”.

Also, he said, this could “come at a great and extraordinary economic cost, putting more livelihoods at risk and potentially causing long lasting social harm”.

“Cabinet has decided that the country will remain at alert level 3 at this stage, but that we should however strengthen the enforcement of existing regulations,” Ramaphosa said.

In the same state of nation address the president also disclosed that the sale of alcohol will be banned ‘with immediate effect.

“The sale, dispensing and distribution of alcohol will be suspended with immediate effect,” He said.

Meanwhile, the banning of alcohol is effected with the aim of making sure that hospital beds were not taken up “by those who come in resulting from alcohol-induced trauma or injuries”.

“There is now clear evidence that the resumption of alcohol sales has resulted in substantial pressure being put on hospitals, including trauma and ICU units, due to motor vehicle accidents, violence as well as trauma that is alcohol-induced,” said Ramaphosa.

He added that many of these problems took place at night and for this reason, a curfew, with effect from Monday, will be in place from 9pm to 4am daily.

A lock down in the rainbow nation, is negatively impacting on Southern Africa Development Community member states who are forced to repatriate its nationals, resulting into a sharp rise in number of unemployment and confirmed Covid-19 cases.