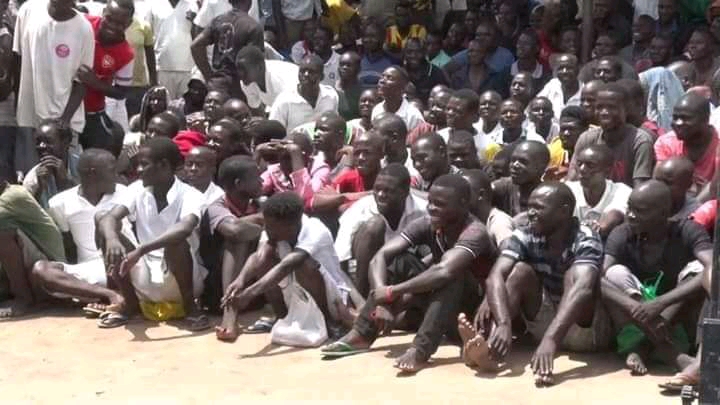 Scores of prisoners who were released from jail on Sunday by the prison inspectorate as one way of decongesting the country’s prison cells in response to the prevention of further spreading of coronavirus which causes covid-19 were stranded in Mzuzu town since they had no money to use for transport to their respective homes.

A snap check to a number of hot-spots in Mzuzu town conducted by Vomi News 247 found scores of released inmates stranded and begging for transport money to commute to their respective homes.

One of the ex-convicts, Jeromy Chavulabwho who had to travel to Manyamula in Mzimba district said most of the prisoners were not aware of their release so they had no time to inform relatives back home to send them money meant for transport to their respective homes.

“We were not notified of our impending release which came about on Sunday at noon, so we had no time to inform our relatives of the need to send us transport money since this release has surprised most of us, so we are indeed stranded here in Mzuzu town,” Chavula said.
Commenting on the development, the northern region prison Public Relations Officer (PRO), Sergeant Austin Masangwale also expressed unaware with the directive to release convicts from lawful custody which came about on Sunday.

“We were not aware of the development, so inmates could not inform their relatives of the impending release,” Masangwale said.
The PRO further disclosed that the Prison Inspectorate released a total of 108 prisoners at Mzuzu prison alone of which two were females
“Those released were 108 in total, two were females and that means we have 785 inmates now, those released were those who had less than three year jail term to serve and it is our wish and hope that that they will integrate well into the community.

Meanwhile, Police spokesperson James Kadadzera told local media that security will likely be compromised following release of over 6000 prisoners.
He said in cases when just about 2000 prisoners are set free, security is compromised such that cases of robbery among others increases. He said now that over 6000 are released, the insecurity situation is likely to worsen.
But he assured the general public that much as the Police are on the alert, communities are asked to be vigilant as well on security issues.