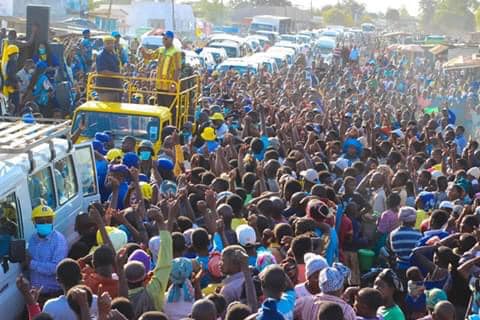 For the first time, I see cards being played well by the DPP regime. Whosoever, is behind the chessboard @ Sanjika might be a genius and putting DPPUDF at a competitive advantage.

In a game of chess when a pawn is entering the eighth row to gain the status of a QUEEN, the opponents always find themselves on the defensive side, with all their attention on the pawn. And this position gives leverage to the other pieces to attack easily.

What the DPP system is doing; is diverting the opponents attention on ATUPELE whilst big pieces are advancing extreme moves penetrating into enemies radar system without notice.Secondly, the system is sacrificing their image and brand by giving ATUPELE an unwarranted full Veep status and full police escort in exchange for something else (INTEL WITH HELD) beyond the reach of their opponents.

I can guarantee you that, using this factor called EL PASSANT MOVE, APM cannot do any single rally and still win the Presidency whilst enjoying himself @ Sanjika (No rigging involved).

The 2 July election will be decided on tribal lines. The painful fact is that, it is will be the most tribalistic election in Malawi history, and downplaying this reality is suicide. With the emergency of Atupele, the DPPUDF has two tribes already on their side against the central region Chewas.

It is only the northern region which practices clean and policy centred politics. The last time the northerners voted for their own was in 1994/99 general elections. However, since the dawn of democracy, elections have always been decided on tribal lines with the central always supporting their own blood and the south likewise. Henry Mkumbira Phiri Neutral Political Dissector