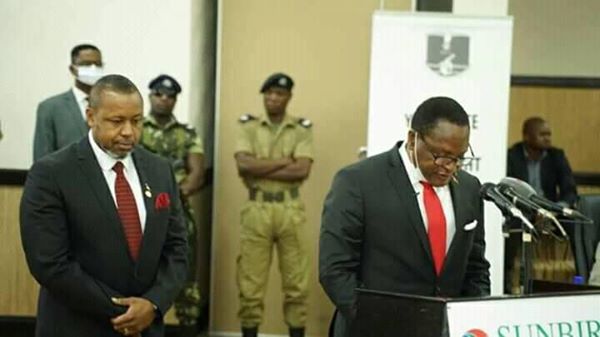 What many people never in expected have happened today in the city Blantyre.

He further apologized to the other stakeholders for a limited space in the hall that came about as a measure of Covid-19 preventive measures.

“Let me welcome the candidate and his running mate and entourage for taking a board step to take part in this historical,” Alufandika said.

In his remarks, Lazarus Chakwera said

“We gathered here as a nation with a destiny, no force on Earth can stop change which God has given us,

“For 26 years the country’s resources have been plundered, our Vice Presidents have been sundered in many ways hence giving us Dr Saulos Chilima as we moved towards our destiny,” Chakwera said.

He further said as the nation, a unified force of himself and Saulos Chilima will create a nation that will benefit all and time if a minority government is over.

He also described the Malawi Electoral Commission as untrustworthy working against the will of a majority Malawians.

Ironically, Chakwera did not recognise MEC Commissioners throughout his speech.

In he remarks the MEC chairperson, Jane Ansah advised the candidates to engage on issue based campaign saying Malawians are tired with mudslinging while upholding to to the electoral code of conduct.

She also said her commission will ensure total impartiality in the management of the whole electoral process.

MEC will scrutinize the nomination papers presented by Chakwera and give the qualification within seven days.