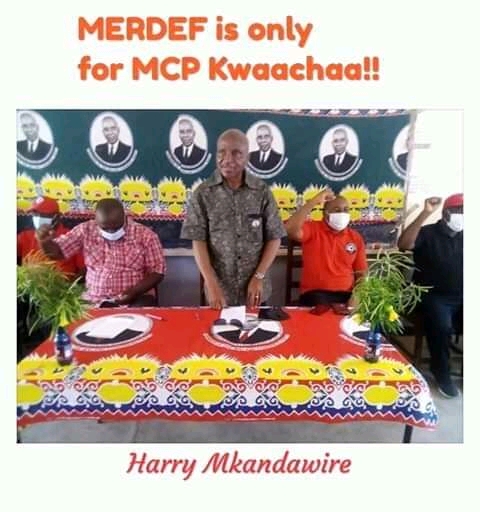 Malawians who fought gallantly for change of government on 21st May under the umbrella, Tonse Alliance were amazed to hear what the Malawi Congress Party (MCP) Second Vice president, Harry Mkandawire said I Karonga on Saturday afternoon.

Mkandawire who was among the MCP leaders campaigning for a parliamentary seat that fell vacant due to the death of its legislative member, Conellius Mwalwanda had no any kind word for the United Transformation Movement (UTM) and its leadership to a point of saying that Merdef loans will only be disbursed to MCP sympathizers only.

The development has so far received a very huge condemnation from various democratic institutions which led in the fight against the Democratic Progressive Party (DPP) and its candidate, Peter Mutharika for what they described as impunity and undemocratic tendencies.

And here below is a press release issued by the Centre for Democracy and Economic Development Initiatives (CDEDI) demanding for an immediate and unconditional apology from both the MCP and Mr Harry Mlekanjala Mkandawire, who is still third in command in MCP though he failed in the parliamentary elections to musician cam politicia, Billy Kaunda.

The Centre for Democracy and Economic Development Initiatives (CDEDI) is challenging President Dr. Lazarus Chakwera to publicly distance himself from the retrogressive and highly insensitive remarks his Malawi Congress Party (MCP) Vice President for the North Mr. Harry Mkandawire made over the weekend at a political rally held in Karonga.

CDEDI has learnt with shock about Mr. Mkandawire’s remarks captured in an audio which has now gone viral on social media, repeating the very same mistakes made by the previous government which is in sharp contrast to what the Tonse Alliance promised Malawians.way they would break their campaign promises willy nilly at the watch of all Malawians!

CDEDI is therefore asking President Dr. Lazarus Chakwera to discipline Mr. Mkandawire as proof that he is not party to this scheme to frustrate the Vice Presidency.

CDEDI is a non-partisan, nongovernmental organization that was established in a quest to attain a well-informed and organized citizenry that can ably demand their social and economic rights at the same time hold duty bearers accountable for their actions.

Among many others CDEDI aims at sensitizing the masses on matters of national importance, inculcate the spirit of a peaceful coexistence among people of different ethnic, political and religious affiliations; provide civic education on people’s rights and responsibilities in economic independence and contribution towards national development and lobbying for the electoral law reforms.

Mr. Mkandawire further says government should prioritize the MCP supporters when disbursing the funds for the Malawi Enterprise Development Fund (MEDF), arguing that they are the ones who belong to the ruling party. Ironically, Mkandawire’s remarks are coming barely a day after President Chakwera smartly avoided to commit to Malawians in his inaugural State of the Nation Address (SoNA), a roadmap on how he would work with the National Assembly to ensure that he empowers the office of the Vice President, as per the promise made by the Tonse Alliance partners.

It is against this background that CDEDI and indeed all patriotic Malawians are looking forward to hearing from President Chakwera on the steps he is going to take in empowering the Veep’s office. Given the lukewarm approach he has taken to honour his promise, it is not surprising therefore, to hear some MCP party loyalists discrediting the Vice President, barely three months after the two were ushered into the high office.
Just to refresh the voters’ memories, President Chakwera in his capacity as the Tonse Alliance torch bearer accused his predecessor Prof. Arthur Peter Mutharika for underutilizing Dr. Chilima and disrespecting the constitutional office, that of the Vice Presidency. Instead of walking the talk, President Chakwera has all of a sudden developed cold feet on his promise, and has been overtaken by his party zealots who are now fighting the office of the Vice President.
Of late, we have also witnessed verbal attacks between supporters of the MCP and the UTM on social media, a development which can be construed as an indicator that all is not well among the Tonse Alliance partners, specifically the UTM and the MCP. We have also recently witnessed a scramble for Members of Parliament (MPs) between the MCP and the UTM who are enticing independent MPs and those from other political parties such as the Democratic Progressive Party (DPP) to join either the UTM or the MCP, a situation which is very worrisome, because the UTM and the MCP are already in bed in the Tonse Alliance administration. One would wonder, therefore, as to what this scramble of MPs is all about! One thing we can be sure of, is that something big is cooking between the MCP and the UTM, and it smells bad for the peace-loving Malawians! This ticking bomb has finally been confirmed by Mr. Mkandawire’s unfortunate remarks.

As CDEDI, we do not only find Mr. Mkandawire’s thinking as retrogressive, but also very careless considering that not long-ago government sent on forced leave the MEDF senior management team for purportedly politicizing the loan disbursement process. This begs the question as to how different is this action compared to the new ‘police directive’ by the MCP Vice President for the north? Mr. Mkandawire and indeed his boss Dr. Chakwera ought to be cautioned against taking Malawians for granted. They should also be reminded that
Malawians voted for the Tonse Alliance, a coalition of nine political parties, andnot MCP alone. It is therefore not wise for any of the leaders for the nine political parties to take to the political podium to claim victory in the June 23 Fresh Presidential Elections (FPE) as a ruling party. This far, CDEDI is advising President Chakwera that he should remember that the Tonse Alliance partners promised a new Malawi for all, and that there is no