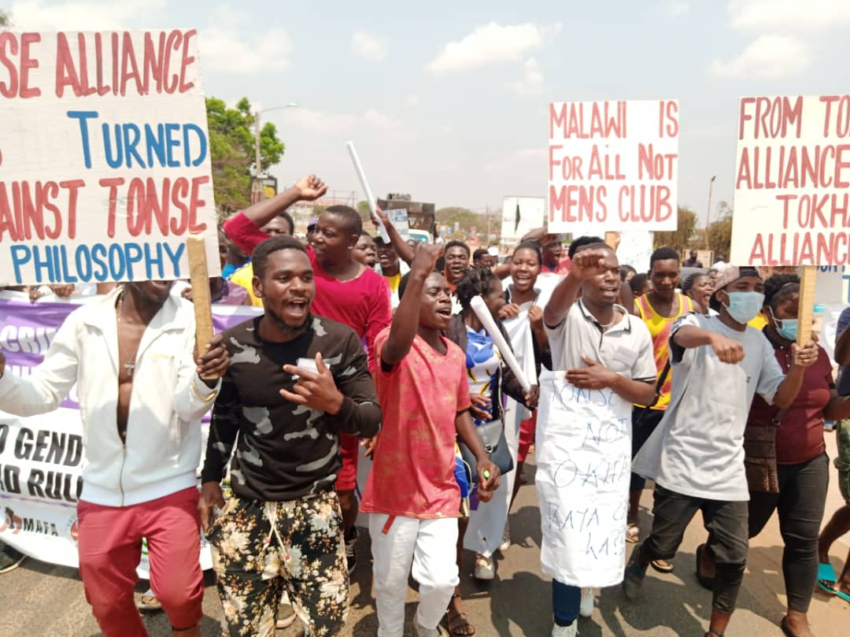 Following recent appointments of minister and parastatal board members which seems to have sidelined women, several civil society organizations led by the 50-50 Campaign Management Agency have organized nationwide demonstrations aimed at registering their displeasure with the remarks the president made as regards to their exclusion in public appointments.

Scores of women are expected to flock out to the streets to take part in the marching mainly those organized in major cities of the country namely Blantyre, Lilongwe, Mzuzu and Zomba.

In a letter made available to all media houses confirming about the demonstrations on Friday, it clearly stated some of the pertinent issues which the women claimed President Chakwera would have considered before releasing names of those appointed into decision making positions.

“Esteemed Colleagues, in view of the exclusion of women in the recent appointments into the Boards and Cabinet, a group of civil society organisations led by the NGO GCN is organizing a peaceful march this Friday in Mzuzu, Blantyre, and Lilongwe.

Meanwhile, the 50-50 Campaign Management Agency which has been garnering more support for Friday’s demonstrations championed by the Women’s Manifesto Movement have stressed that the demonstrations are on on Friday no matter what” Reads part of the letter.

Team Leader for the 50-50 Campaign Management Agency, Viwemi Chavula notes that appointment of women is a constitutional mandate which does not need pushing from other stakeholders.

The organizations were dismayed by Chakwera’s sentiments who on Monday challenged women’s rights activists to produce a list of skilled women who qualify to be placed in parastatal boards considering that for the past two decades Malawi has been producing more than 2000 female graduates every year.

Chakwera who was responding to questions at a press conference to mark 100 days in the country’s highest office said he should be given more time to include more women on the positions in question.

However, the sentiments irked the organizations who have since described it as a lame excuse hence writing the police Inspector General informing him of their plans to hold peaceful demonstrations on Friday October 9, 2020.

Since ascending to the office of state president, Chakwera has made a number of decisions which have invited heavy public condemnation like the appointment of families and relatives in cabinet.

2 thoughts on “Women Protest Against Chakwera”