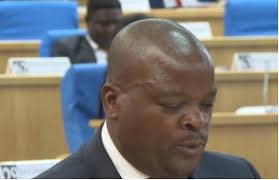 Chihana had no any kind word for president Chakwera for what he described as mental torture on an innocent, loyal and obedient servant of the country.

Chihana the condemnation on Monday in parliament as Members of parliament are responding to State of Nation Address (SONA) the president delivered on Friday, September 4 during the opening of 49th session of the House’s discussions.

According to Chihana, “Namathanga played his role to ensure smooth transition of power from former President Peter Mutharika to the incumbent president and he did not deserve this embarrassment subjected to him by the executive,

“This is the impunity or executive arrogance which should be condemned in its totality, honestly Namath anga wore a brave face in change of government during that presidential election, that treatment is inhuman,” said Chihana amid a loud applause from opposition benches.

On Thursday last week, Chakwera reinstated General Vincent Nundwe as the MDF commander, five months after Mutharika relieved him from his duties and destined him to other duties in the diplomatic mission in New Delhi, India.

However, Nundwe did not trave to either Delhi or Jakarta waiting for parliamentary approval on his new assignment but only to return into combat gear from retirement.

This kind of scenario took place in 1994 when former president, Bakiri Muluzi appointed a retired police Commissioner, Feyani Chikosa to lead the Malawi Police Service as inspector General replacing McWilliams Lunguzi who had fallen out of grace for being loyal to the Ousted Malawi leader, Hastings Kamuzu Banda.

When making his announcement, Chakwera said General Nundwe was fired for political reasons hence he need to heal the security agency by bringing him back to continue his job.

However the return of Nundwe received mixed reactions from various quarters of the society while others, welcomed and applauded Chakwera for the decision he made to redeploy Nundwe as the MDF Boss.