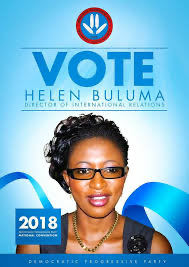 We are reporting without fear or favour,they’re allegations of fraud and abuse of office that is happening at The National Oil Company of Malawi Limited (Nocma).

Our investigate reporter has been informed about speculations of highest level of corruption and impunity taking place at the aforementioned public institution.

Helen Buluma who contested for a position as the Director of International Relations at the Democratic Progressive Party’s convention in 2018. Is not only partisan but also an assumed corrupt politician who is leading the most influential and profitable public institution in Malawi. Nocma has no CEO currently and she is performing her duties as an acting CEO due to the virtue of her being the deputy CEO.

Our investigative reporter is alleging;Buluma has unlawfully and deliberately suspended the Director of Finance Mr Jacob Milanzi and she is intentionally sidelining the director of operations Mr Nicholas Reuben, inorder to promote her self aggrandizement activities in collaboration with the Secretary to the President and Cabinet Mr Zangazanga Chinkhosi.

We are further abreasted with shocking allegations that Buluma is forcing Malawi Energy Regulatory Authority(Mera) to approve the awardment of contracts to two companies namely; Lakeoil and IPG,without submitting evaluation report or consideration of due and recommended procedure.

Buluma and Chinkhosi desperately wants these two companies to be awarded a contract to supply more than 3 million tonnes of fuel to Malawi. One wonders what is in for them?

According to our understanding as far Nocma procurement process is concerned.

An evaluation team must consist of;

Peculiarly! Buluma sidelined some of the aforementioned persons and only used her in-house accomplices to award the contract to these two companies imposed by her and Chinkhosi.

This is strange and unheard of. Mera regulates Nocma not the other way around,yet Both of them are desiring for a shortcut. Where is the RULE OF LAW?

It is further speculated Chinkhosi threatened the acting CEO of Mera Counsel Ishmael Chioko to approve their selected bidders(two companies) without due diligence or face demotion or suspension.

Fortunately! Mera has declined to approve the awardment. As it didn’t meet the required and recommended criteria.

A month ago,the president of Malaw,His Excellency Dr Lazarus McCarthy Chakwera gave a directive to Nocma’s Board of Directors to investigate Buluma and if found guilty of any wrong doing, she must be fired with immediate effect. Strangely the following day the SPC Chinkhosi went to Nocma’s office and told the staff point blank that Buluma is not going anywhere and she can’t be fired. What a challenge! Is Tonse Government being run by an elected president or by an appointed civil servant?

Chinkhosi as SPC is chairing both:Nocma and Mera. We find this as a conflict of interest. As the SPC Chinkhosi has personal interest and that may lead to unfair and unjust practices.

We are here to inform the nation nothing but facts and if these are mere allegations,let Buluma refute!

As we are here exposing these allegations,there is a bone of contention between Mera’ s Board and Nocma’s Board. Few days ago Mera urged Nocma to submit AN EVALUATION REPORT OF THE TENDER PROCESS in which Nocma has not only failed to submit it but as well failed to show up at a scheduled meeting.

Allegations and Speculations that needs to be investigated upon:

Buluma submitted names of companies to Mera without evaluation report. She went further to suspend a director without following thorough process. She has sidelined the Director of operations for no apparent reason.

Her evaluation team is illegal and has no mandate to award any contract to any organization or company.

She imposed companies that didn’t meet the needed capacity and lacked verified past performance.

She defied the directive made by the Minister of Energy Hon Newton Kambala,in which he said the tender process must be put on hold until further notice.

The SPC Chinkhosi is alleged to be interfering and pioneering impunity and corrupt practices by using his office to influence and engineer self awarding acts.

It is speculated the SPC Chinkhosi is in the forefront of defending and protecting Buluma. Only God knows Why?

Why is the SPC Chinkhosi threatening people to force them to do only that sits well with his interests not that of Chakwera’s administration?

Therefore, we are appealing to Anti Corruption Bureau and Hrdc to follow up on these EXTREME ALLEGATIONS.

2 thoughts on “A NEED FOR INTENSIVE INVESTIGATION AT NOCMA: WHAT’S THE CONNECTION BETWEEN THE DEPUTY CEO BULUMA AND THE SECRETARY TO THE PRESIDENT AND CABINET”