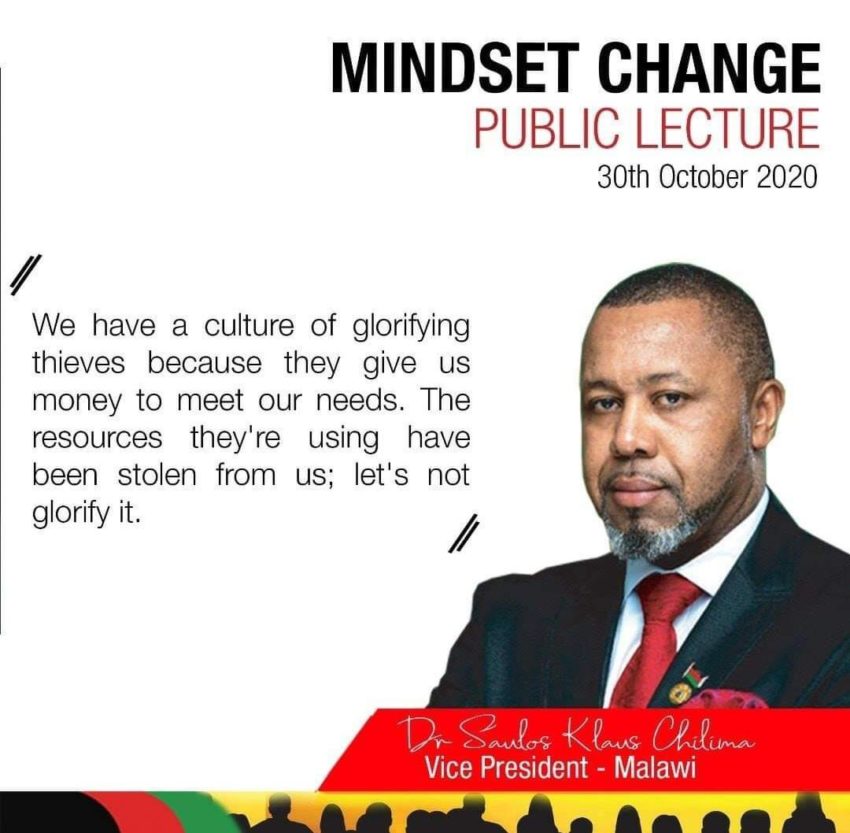 Several intellectuals have described a public lecture presented by the State Vice President, Saulos Chilima as full of hope, encouragement and has a huge possibility of transforming the country from poverty to economic prosperity.

Social and economic comentator, Henley Kachaje could not hide his respect for Chilima’s public lecture dubbed ‘Mindset Change’ by among others describing it as brilliant and a game changer for Malawi if properly executed.

He said Chilima loaded his presentation document with many mind blowing ideas on what the country need to do to move forward and attain some of the goals set by United Nations’ Sustainable Develoment Goals (SDGs).

“I had missed the live session on Friday and I have just watched the lecture online now. Wow! This was brilliant and massive. Very loaded with many mind blowing ideas on what we need to do to move this country forward.

“The Vice President was on top of his game. Mindset change is very key for both individual and national transformation.

Abale, let’s make this happen, ” Kachaje said.
At some point the Vice President could be heard like echoing what he said during campaign in a run up to the 2020 June fresh presidential election.

During campaign he was fond of telling people to respect their leaders and not to fear them saying previously, there was a problem where the citizens feared leaders and treated them as demi-gods, which was not good for development.

Some of the notable points being reflected in the mindset change dubbed pubic lecture also include:

Meanwhile, state president Lazarus Chakwera has also praised Chilima’s public lecture saying if corruption which is deep rooted in the country can be dealt with then the theme ‘Mindset Change’ will be successfully executed.