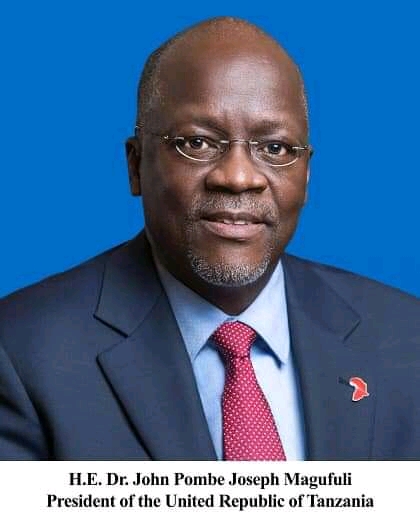 Tanzania’s President John Pombe Magufuli has died on Wednesday at the age of 61 years.

Nicknamed ‘The Bulldozzer’ Magufuli became popular because of his no nonsense altitude when he first became minister of roads in 2015 before ascending to the presidency in 2017 succeeding Jakaya Kikwete whose government was mired with serious corruption acusations.

However, Magufuli’s tenure of office could not just go by without some critics punching in some holes calling him a ‘modern day tyrant’ posing threat to the east African country’s democracy when he among others shut down newspaper publications, radio stations and arrested journalists.

Responding to some accusations during his 2020 presidential campaign trail late Magufuli at some point made a stunning comment saying “democracy must have limits and that should be within the limit of our laws.”

Critics have until his death accused him for the missing of a journalist and abduction of a billionaire Mohammed Deje who unceremoniously went missing in 2017 but Magufuli vehemently denied any involvement in the abduction of any missing media practitioner.

Armoured military vehicles were on Wednesday afternoon all over the streets of the capital, Dar es Salaam giving death speculations for Magufuli who has been absent from public domain for some time since reports emerged that he has contracted the deadly Covid-19 disease.

According to Tanzanian’s constitution Magufuli’s death has given Tanzanians no choice but to have a female president, Samia Suluhu Hassan becoming the third female president on the continent of Africa following the footsteps of Liberian Salif Johnson and Joyce Banda of the Republic of Malawi.

However, Magufuli’s death has brought mixed reactions from a cross section of Africans with many believing that Western countries have deliberately wiped him out to frustrate Africans from standing for the truth.

Commenting on one of the continent’s popular Facebook page “Mikozi Forum” several contributors have posted with their opinions fetching more than a hundred likes with a space of half an hour.

“That is why African presidents execute orders to kill their own people just in fear of death, I will always believe Magufuli is killed just like Lumumba, Ghadaffi, Pierre Nkurunzinza and many more I can mention. God will one day make the justice and you will pay it back, what I know is that Magufuli will never die because he has left millions like him across Africa,” writes Zinji Daah

Another contributor, Miguel Mahommed made a very brief comment saying “I agree, Western guys are evil, we know the whites are behind this death, the guy (Magufuli) was a brilliant and wise person, si afisi athu tirinawo kunowa (not the hyenas we have here),”

An interesting comment coming from another contributor only identified himself as Tjimmyy Turner Waiser was full of praise for the departed Tanzanian leader reading “Man who lived and died by his own principles, the true son of Africa and there is place for people like John Magufuli, Rest in paradise servant leader, good leaders in Africa always don’t last,”

An official program for the burial ceremony of Magufuli is expected to be announced by authorities in the sisal growing nation and scores of world leaders and high profile dignitaries are expected to attend the ceremony.

Until his death, John Pombe Magufuli has been a strong critic of the western countries on some of the global political ideological principles including that of the existence of the novel Covid-19 pandemic.