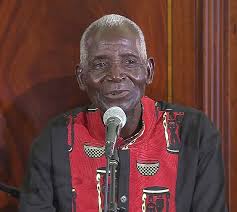 The 90 year old, veteran musician Giddes ‘Agide’ Chalamanda is said to be swimming in a pool of poverty despite several artistic projects he has completed in more than 60 years of his music career.

Star musician who has taken Malawi music to the higher levels with mash-ups, Patience Namadingo disclosed this on Monday when FDH Bank was coming up with K2 million package for legendary music maestro.

Namadingo, who is also FDH Ambassador through projects popularly known as ‘reggae mash-ups’ which he has done with Chalamanda and several others said that FDH Bank would build a grocery for Chalamanda now that he is a ‘retired musician’.

In an interview, FDH Bank Public Relations Officer Lorraine Lusinje, said it has pleased the bank to respect the veteran musician with something that will be seen as his retirement package.

“The K2 million package is distributed as follows, K500,000 as payment for mash-up performance with our brand ambassador, Patience Namadingo and then K1,500 000 for the grocery and stocking it,” Lusinje said.

She also said that apart from building the 90-year old musician a grocery, the legendary musician will also be their Banki Pakhomo agent.

She said through Banki Pakhomo, people can transact and access services through the agent and that Chalamanda as an agent, is linked digitally to the bank.

“People in the community will benefit from Chalamanda as an agent in terms of different transactions and Chalamanda will also benefit,” Lusinje said.

Edgar ndi Davis Band, who have been starring with Namadingo for years and even took him to his dream country, the United States of America (USA) have since hailed FDH Bank and Namadingo for the support.