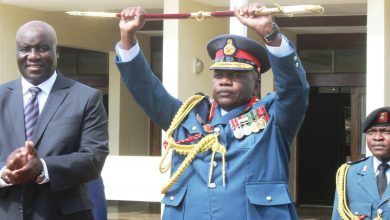 Government of Malawi, is still contemplating on whether to give a dismissal letter to the deposed MDF army Commander, Peter Namanthanga.

However, Minister of Information Gospel Kazako said the letter of the dismissal will not affect the set up at MDF.

This comes after some security analysts contend that if the government does not produce the letter to Namanthanga it means MDF has two Generals, simultaneously.

When responding to aquestion about Namathanga whereabout from one of the local Radio Stations, Kazako simply said Namanthanga is in Malawi.

Namathanga was Army’s General Commander during DPP era who took over from Nundwe in a controversial move that most analysts raises eyebrow on.

During a press briefing announcing the return of the army commander, Vincent Nundwe state president Lazarus Chakwera said he will engage the security council to decide on the matter.