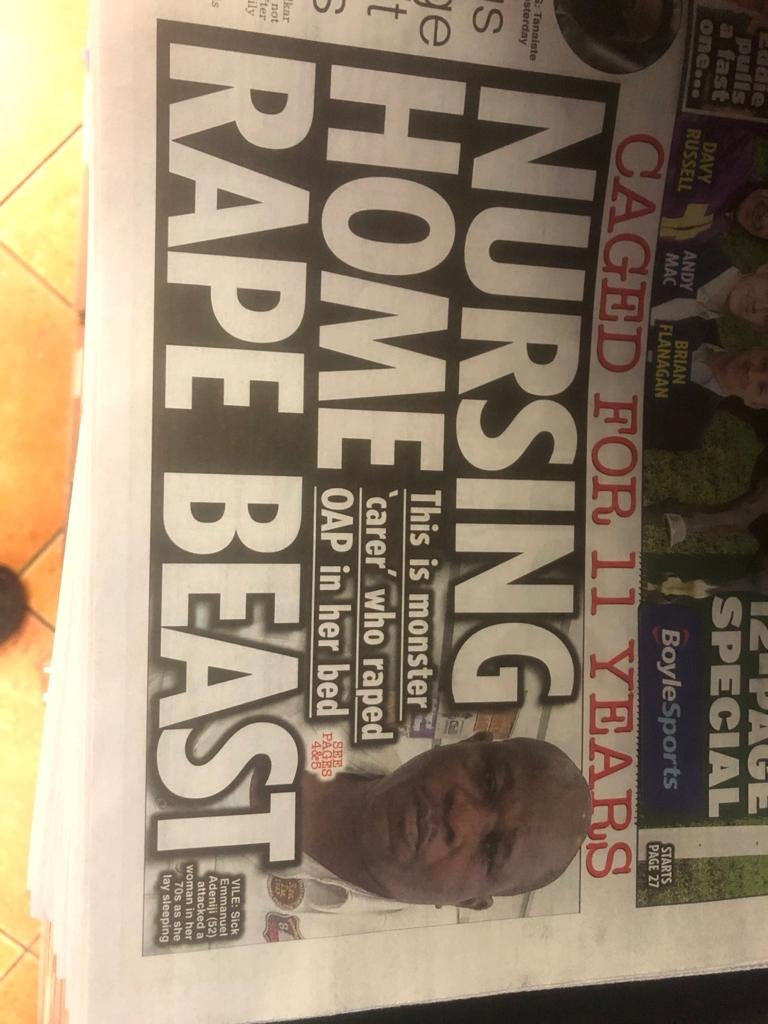 A healthcare assistant who raped a 73-year-old woman with Alzheimer’s in her nursing home bed during the Covid-19 lockdown three months ago has been jailed for 11 years at the Central Criminal Court.

Emmanuel Adeniji, 52, with an address at Royal Canal Court, Kilcock, Co Kildare, initially denied the offence to the gardaí but pleaded guilty in court. Mr Justice Paul McDermott today described his crime as “an egregious breach of trust by a qualified and experienced healthcare worker”.

She was found later that morning in a distressed state by a staff member doing her rounds. The woman was upset but coherent; gardaí were called and she made a statement. The victim said she was in her room all the time as they were “locked in because of the virus”.

Adeniji was arrested 11 days later and denied raping the woman. However, a DNA sample from him matched one taken from the victim. He was charged and pleaded guilty. He has no previous convictions.

The woman’s family said they would “never forget how that man had single-handedly destroyed our Mam’s life”. They described how they have been unable to comfort their mother by hugging her as they normally would since the rape in April. The elderly woman remains terrified the man will return to her room.

Her daughter told the Central Criminal Court: “We always said we will dread the day she loses her memory but now one day we hope she wakes up and doesn’t remember”.

Mr Justice Paul McDermott described it as “an egregious breach of trust by a qualified and experienced health care worker” and “a most serious” crime against “a very vulnerable, elderly lady” who was “confined, helpless and totally alone”.

The nursing home was the victim’s home, he said, and had been “carefully chosen” for her with her family. The effects on her were “devastating,” he said. She had feelings of “depression, suicidal thoughts, nightmares and a lack of safety”.

Mr Justice McDermott said the family had built up trust with the staff, which had been “shattered” by this. He said Adeniji is a married father of four children, trained and employed in healthcare for 15 years.

The judge said Adeniji showed little or no insight of the effect on the victim and his expressed remorse lacks depth beyond verbalised regret. His “lack of real remorse” is “to ordinary decent people, simply, grossly wrong”. He sentenced Adjeniji to 11 years in prison with the final year suspended.