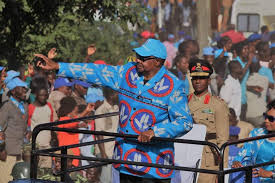 On 31st May 2014, Professor Peter Mutharika, then 75, took an oath of the presidency, pledging to defend the constitution of this great Republic which represents the will of the people.

Former president Mutharika: The heinous operations appear to have been well coordinated from his base
However, as evidence of loot of public resources under his six-year-watch continues to unravel, the nation is gripped with shock and awe wondering if, indeed, this Mutharika turned up for the job he swore to defend.

There is hardly a single parastatal that, under his watch, hasn’t been milked.

Equally depressing and stressing is the fact that all these heinous operations appear to have been well coordinated from some forces in the State House, yes, where the president operates from.

How does one explain a case where the head of security for the President, yes a mere bodyguard, owning five-star lodges, fleet of expensive vehicles, numerous mansions and several properties? He is super rich.

Or how does a Head of State, using his tax free status, import more than 100 vehicles tax free and, oh Jesus, import over 2 million bags of cement without paying tax?

Or how do you explain the strange fuel allowances at ESCOM where, tens of thousands of people not working at the institution, collecting fuel—and some, even getting 500 liters of petrol in a day?

The asinine of it all is that, as plunder of state resources deepened under Mutharika’s watch, Malawi slipped even further not into poverty but destitution with millions going hungry as social sectors run dry and devastated.

There is absolutely no one who can narrate a story that would spin Mutharika into a worthwhile leader we had. Malawians are broken. They can’t digest the large pizza of betrayal served before them by this Mutharika.

That is why, in the spirit of national healing, Mutharika need to man up and speak forgiveness and reconciliation to the nation.

He needs to address the nation and apologise for breaking the oath of presidency he took to defend the laws of this great republic.

If he doesn’t do that, the current government should show no mercy: They must investigate and prosecute him.

In fact, if Mutharika still wanted to be president by today; it means he still would have power to withstand trial before our courts of justice“`