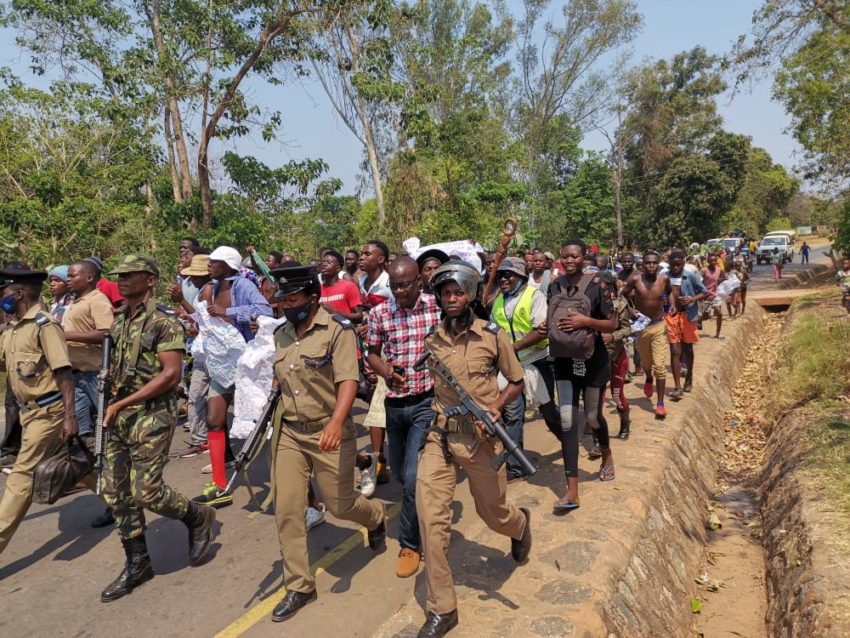 Ironically, on Tuesday, scores of villagers from Sanga which is the headquarters for TA Mankhambira led by former Acting Traditional Authority (T/A) Mankhambira (Harrison Mukwakwata) marched to Nkhata Bay District Commissioner’s office in protest against the coronation of Banda where they delivered a petition with eight points which among others call for the cancellation of the coronation.

In an interview, Mkwakwata said the coronation flouted customary rules and procedures used when choosing successor in case of a deceased chief.

Mkwakwata said going by the guiding principles used when choosing successor to the crown then it is Vutani Kondowe who is a legitimate heir to the throne of T/A Mankhambira.

“There is nothing like rotational succession in the choice of the one to be crowned a king.

As family members voted for Vutani Kondowe as our new king surprisingly the District Commissioner and the minister secretly crowned Banda at Ching’oma forest which is not our headquarters instead of Sanga.

“According to our custom, the rightful heir is chosen by the majority of royal family members and not by the government,” Mkwakwata said.

Meanwhile, the demonstrators have threatened to take unspecified action if their demands are not quickly adressed.

In an interview after receiving the petition, Nkhata-Bay District Commissioner Rodney Simwaka said he will deliver all the concerns to the concerned authorities though he was quick to point out that the local government followed the court ruling in which Budden Banda was declared rightful heir to the throne in 2017.

“Government always follow normal procedures but in this scenario, we followed the determination of the High Court which ruled in favor of Banda.

We were supposed to install him in 2017 but due to political tension we delayed the ceremony and now we have implemented the court’s judgement,” Simwaka said.

Despite the judgement delivered by Judge Dingiswayo Madise in the Mzuzu High Court the losing side proceeded with an appealed to Supreme Court.