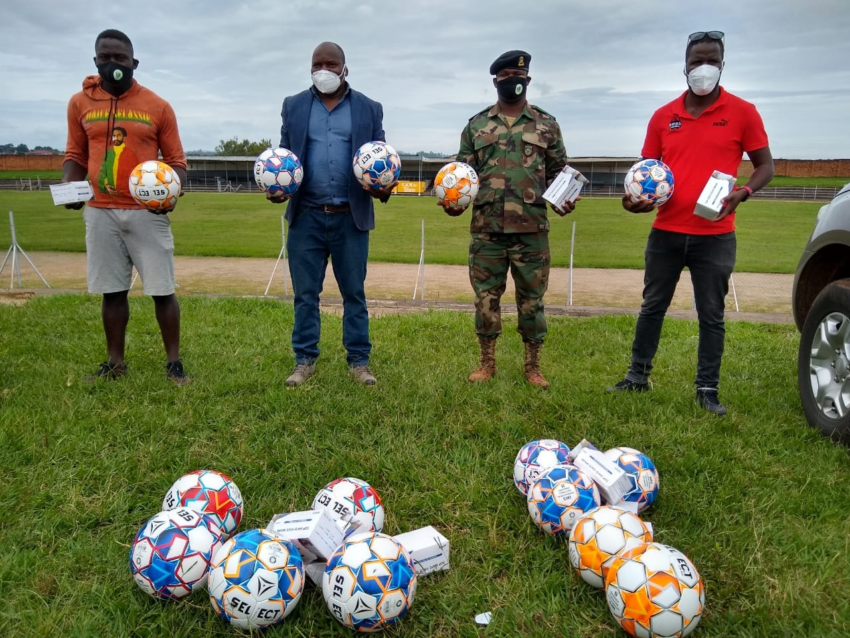 One of the non-profit Non-governmental organizations striving to develop grassroots football, Mpira Mmudzi Mwathu, has donated soccer balls to super league teams in the northern region to ease some challenges due to effects of the novel Covid-19 pandemic.

Chairperson of the organization, Chimango Munthali said the donation was also one way of celebrating the life of Vincent Chapasi Tigone Munthali, father to all the board members for Mpira Mmudzi Mwathu who passed on 25th January four years ago.

Munthali said Mpira Mmudzi Mwathu has for the past three years been celebrating the contributions and achievements of his father by donating sports equipment to sporting teams in various discipliness across the country.

“We have been celebrating the life of our father by at least donating various sports equipment to clubs and individuals across the country, and we believe these soccer balls and face masks will go a long way in mitigating some of the challenges affecting the preparations of our clubs which I understand have inadequate training footballs,” Munthali said.

In his remarks, Football Association of Malaw’si second vice president, Othaniel Hara said it is always pleasing to the FAM leadership to see more partners coming forward to help teams in various ways saying it is very difficult at the moment for an individual to consider assisting football teams when economic activities are not favourable due to effects of Covid-19 pandemic.

The Super League of Malawi (Sulom) representative in the region (north) Henry Banda praised Munthali and the entire board directors for Mpira Mmudzi Mwathu for quickly responding to the plea for assistance to teams in the region saying most of them are self sponsored and struggling financially.

“It is not long ago when I appealed to Mpira Mmudzi Mwathu (Munthali) to consider assisting TNM Super League teams in the region who have are finding the going too tough in the elite league due to among others, inadequate footballs for facilitation of a proper training session,” Banda said.

Speaking after receiving the soccer balls, the Secretary General for the military outfit, Moyale Barracks, Major Denis Furao Mwale said the donation will assist teams train properly since the shortfall has been greatly contributing to team’s poor show in the league hence being among those anchoring the log table of the sixteen member TNM Super League.

“We have struggled a lot in this year’s first round of the league due to among others inadequate training footballs, so we are very thankful to Mpira Mmudzi Mwathu for this wonderful gesture, coming with such a donation at this difficult financial situation cannot be be taken for granted, we are very thankful,” Mwale said.

Last year, the organization, also donated various sporting equipment in Dedza District while in 2019 the organization took the similar initiative to one of the primary school zones in Mzimba North Education Division.