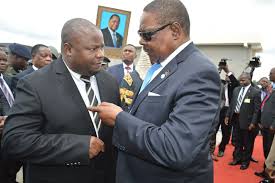 VomiNews247
Reports reaching our news desk this morning shows that President Peter Mutharika has been consulting since Saturday on the best possible way to fire the minister of foreign affairs, Kondwani Nankhumwa.

“It’s just a matter of hours, Mutharika will soon announce a mini cabinet shake-up which will leave out the out of favour, Kondwani Nankhumwa while at the same time fill the gap left by Chimunthu Banda having refused to pick a ministerial post,” he said.

In a voice note circulating on social media one of the DPP diehards from Bangwe Township in Blantyre, Mike Chitenje is heard accusing the party leadership’s intention to use the police to arrest those with opposing views to those of Mutharika and Chisale.

“When am fighting I don’t look back, and your meeting of two people aimed at silencing your critics will take you no where, and if you want to effect arrests then come out an arrest fifteen (15)million people who are tired with your leadership,”Chitenje said
Party spokesperson, Nicholas Dausi and secretary general, Grezelda Jeffrey have not yet responded on the matter their names having also appearing on the list of those not wanted by some party followers.

Meanwhile several political commentators have described squabbles happening in DPP as the end of an era for Peter Mutharika who also failed to resolve an impass at the University of Malawi when he was minister of education during the tenure of of presidency for his brother Bingu.

1 thought on “Mutharika on verge of firing Nankhumwa”