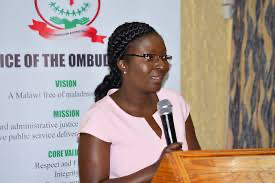 By our staff reporter

The Ombudsman has on Monday morning released a report aimed at bringing sanity at Malawi Communications Regulatory Authority (MACRA) which has spelled doom to most of the who top management staff.

In her determination, Chidzuma described most of the recruitment procedures for those holding key positions as Unconstitutional and irregular.

She said “the appointment of Itaye as Macra Director Genaral was illegal and that those who facilitated his hiring acted outside their mandate,”

These are the then Principal Secretary in the ministry of Information, the then Board and then Malawi Statutory Cooperation Chief Mr Zangazanga Chikhosi.

Chizuma says the whole process to hire Itaye was a mockery and a maladministration.

She further added that redeployment of Itaye to Postal Corporation as Post Master General and to Lilongwe Water Board as CEO was illegal and a maladministration.

She has therefore nullified his contracts including his current contract and she has directed the Macra Board to fill the position of DG at Macra.

She has also directed the board not to pay Mr Itaye any benefits, and if that was done, it should be recovered.

The Ombudsman report, has however cleared Itaye on allegations that he is a convict, saying no evidence on this was found.

Director of Internal Audit recruitment has also been nullified and according to Chizuma, such post does not exists in MACRA’s posts.