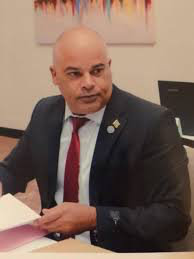 ” Munthu sayipa yense” so goes the saying . Wamisala adaona nkhondo ( though this seems to be madness but there is a method in it ). I have observed that recently there has been attacks on Blantyre City South East Parliamentarian Hon Sameer Suleiman . Of course it is politics , but it came to my interest to dig deep how the attacks have started . A Day ago , Sameer Suleiman Spoke in Malawi’s Parliament about a Landmaster , let’s say the Landrord of many plots in the country Mr Faisal Aboo who owns over 1000 ( One thousand plots ) in our country Malawi) . Yet the guy is an Asian who holds a British passport.

My concern is not on the attacks going on Hon Sameer Suleiman. No ! Sameies is not a big issue ! , but my focus is on the this Colonialist who is taking advantage of poverty and go to the extreme of owning three quarters ( 3/4) of Limbe Town . If John Chilembwe was alive , Faisal Aboo could have been dead by now .

The issue of land is Paramount . This issue raised by Suleiman must not be overlooked. We have Malawians in many parts of this country who don’t have land yet Foreigners especially Asian Origins are acquiring huge sum of lands .

Livimbo Land Saga is still fresh on our mind . In year 2019 ( last year) , another Asian fraudulently acquired land belonging to Livimbo School and built a Warehouse.

Right thinking Malawians can agree with me that Asians are colonialising this nation . Can this be a right time to reclaim back our country?

As a country we need to join hands to keep fighting and defend the sovereignty of this nation.

Recently a company named Jambo Pay from / of Kenya with close ties to Master Landrord ( Faisal Aboo) was given a contract to help Blantyre City in collecting revenues as if this country does not have Malawian companies who can collect money for the city . Ndalama zikupita kwa Faisal Aboo plus Zina zikupita ku Kenya.

WE SHOULD ALSO REMEMBER THAT THIS BIG CROOK FAISAL ABOO WAS ARRESTED DURING BINGU WA MUTHARIKA’S TIME FOR MANY CRIMES – AMONSTS THEM, HE WAS EXTERNALISING FOREX.

Faisal Aboo is very powerful in this country. He can dictate who to be employed . For example , in late June this year , two Faisal trusted drivers were employed by MACRA without Following procedures. Izi zikuchitikatu pompano. The guy is untouchable ! In late June ( on 24th June 2020) , the Head of Administration Mr Henry Macheso employed two drivers with orders from Faisal Aboo. These drivers were solely hand-picked by Faisal to reasons known to him . Faisal has boys in many City Assemblies too. He must be strategic.

These two Faisal drivers were interviewed at MACRA yet the job was not advertised in any Newspaper . The two drivers reports to the Head of Logistics yet the Head of Logistics was not invited to be a member of the interview panel . Mr Henry Macheso was accompanied by four individuals from Telecommunication and Broadcasting Departments.

The Honourable MP for Blantyre City South East Constituency, Hon Sameer Suleiman brought an important issue to Parliament. Chiwembe , a township where Faisal Aboo has been given ( Big) land to buy is in his Constituency . HIS CONSTITUENCY IS BEIY RAPED BY FAISAL THE LANDRORD OF LIMBE. Any MP could have done good like what Suleiman has done . If Faisal will succeed be given land in Chiwembe as well as if he succeed to buy a Forest in Chigumula , then he will add more piece of Malawian plots on top of his 1000 plots . LET US STOP FAISAL FROM ACQUIRING LAND IN CHIWEMBE AS WELL AS PURCHASING CHIGUMULA FOREST.

We should not forget about the K 300 Million deal at Blantyre Water Board in which Faisal’s close friend systematically supplied goods worth K 51 Million but was given K 300 Million . FELLOW JOURNALITS THIS CAN BE AN ASSIGNMENT TO SOME OF US . Tiyeni tifufuze . Three Hundred Million Yachuluka !

Faisal Aboo is the owner of Pacific Properties . Of course the one thousand plots are part of this company.

His close friend Kasman of CP Feeds owns over 1000 plots as well . Mr Kasman is the owner of CP Feeds and Globe Computers . He also owns Shire Limited , Ocean Industries and he is operating a mine as well . Another untouchable Mumwenye.

This is our country . CP Feeds is dominating the Poultry business yet as the country , we are doing nothing to protect Indigenous Business People from these Asians who are Dominating everything.

I may Support a different party than the party which Sameer is belonging to . But on this , Sameer deserves respect and Support. Faisal Aboo and Kasman akutilowa muchala! A foreigner owing more than one thousand plots in Malawi ! Is this good ???? FRIENDS YOU MAY SHARE THIS ARTICLE TO FRIENDS! We are not xenophobic , but something must be done !

FAISAL IS ALSO FOND OF EXTERNALISING FOREX.That must also be taken not for granted!

He also received money from Kuwait claiming that he built new boreholes in Malawian villages. Show this country new boreholes Faisal has constructed . You will only found he rehabilitate old boreholes. He uses the Kuwait money for his personal gains.

Without fear or favour , the following companies need to be investigated ! CP Feeds ( Which is dominating Poultry business, Ocean Industries + Shire Limited ( whose owner owns more than 1 thousand plots) , Pacific Properties owned by Faisal which owns almost Limbe Town and it is set to buy Land in Chiwembe.

Human Rights Groups and the ACB must investigate a procurement ( payment of ) K 300 Million which took place at Blantyre Water Board.

Mr Andrew Masiye the Planning Manager of Blantyre Water Board who played a key role in the K 300 Million Saga must be investigated.