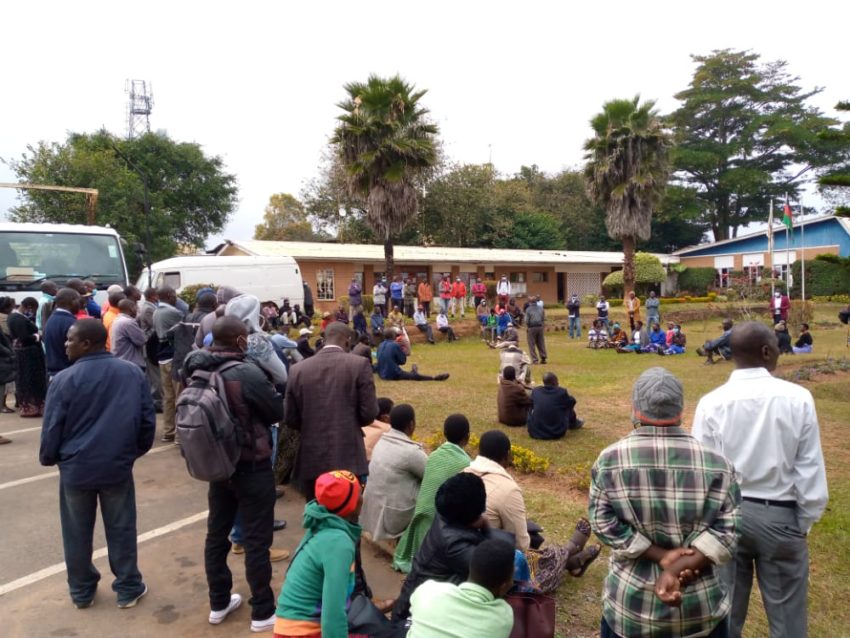 Failure by the Vice President, Saulos Chilima to visit the City of Mzuzu due to the strict measures put in place by government as a way of fighting Covid-19, is said to have been a lost opportunity for the Council employees to present their grievances to him.

In an interview on the sidelines of the angry striking employees, the chairperson of Mzuzu City Council Worker’s Trade Union, Typen Kamanga said apart from the issue of salaries the employees will not accept three of their top bosses to return working at the council.

“We demand nothing short of our three months pay and also we will not accept the Director of Health (DOH) to return to work even when the strike is over, the DOH is contaminating these other officials with crooked ways of running the council,” Kamanga said.

Ironically on the list of Senior Management officials who are not wanted by the striking employees include the Council’s Chief Executive Officer, Gomezgani Nyasulu who is barely month old in office and the Director of Finance, Salom Saka.

The Council’s Public Relations Officer, MacDonald Gondwe could not comment much on the issue, describing it as a management in nature which will soon be resolved adminstratively.

“It is true that our workers have downed tools demanding their salaries, but I cannot comment much on the issue which will be resolved adminstratively, soon the management will meet and resolve all those outstanding issues,” Gondwe said.

On Friday the Mzuzu City Council Worker’s Union had an engagement with the management where it was agreed that employees should start getting their arrears starting with the Mk19 million which was collected using local resources.

Meanwhile, FDH Bank has agreed to bail out the financially struggling Mzuzu City Council with an over draft of Mk180 million which has not yet reached its bank account.

Workers at Mzuzu City Council have been staging strikes time and again demanding their salaries, a development which have been paralyzing operations of the council to an extent failing to remove refuse at various hotspots in the city.